My mind has a bazillion things going through it right now and I just realized I haven't given the update on my second chance day (Day 208).

The second chance for Merle Haggard? He and Kris Kristofferson went back and forth on songs, and both of them forgot some lyrics. Last time when I saw Merle, his intoxication was the obviously the reason for his poor performance. This time, once he started the song again he got it right. But they both look old (because they are). It gives hope that even at that age, you can still contribute and have some life left in you.

The second chance for me? Finally making it to a concert again? Well, here's how it worked. We had seats in the third row. The third row in the orchestra pit. Since the third row orchestra pits seats aren't permanent seats, nice padded chairs were brought in. Comfy seats, lots of legroom, plenty of space to move and adjust, up close to the stage. My body made it through just fine. I don't know if there is another concert in the near future, but this one worked out well.

The second chance watermelon didn't turn out so well. Whenever we've grown watermelon in the past we've always winded up picking them too early. Despite when we plant them, they usually get hit by the frost before they are ready. But after looking at them carefully, we found one of the biggest ones out there. The one with the creamy yellow underbelly. Stuck it in the fridge, got it nice and cold, and cut into it for dessert.

It was pink. Not just pink, but light pink. I thought by chance it could have been a different variety and gave it a taste. Uh, no. So the big, beautiful, green striped watermelon had to go bye-bye. We still have several growing in the garden, so the second chance plants will just have to give us a second watermelon before the first freeze. 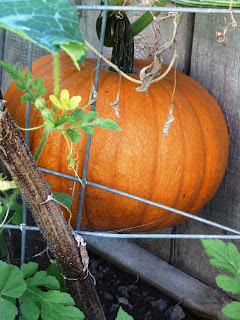