I've always tried to rationalize what I eat. Especially the not-so-good stuff. It's like those articles I read called Eat This, Not That. It spotlights different restaurants' choices and suggests which one is better than the other. Not that they're good for you, just that one is better.

My most frequent (and flawed) which choice is better thoughts: 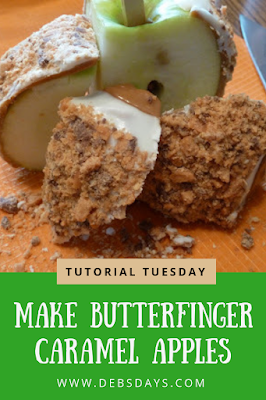 I'm not sure I can count today's picture and tutorial in the healthy department. Yep, there are apples involved. But they also have caramel. And chocolate. And Butterfingers.

They may not be healthy, but they are unbelievably tasty! Click on the video below for the directions:

This recipe is featured in Valentine's Day: 14 Ways to Say I Love You with Desserts. Pick up your copy today!