I like September because that means it's almost October.

October means fall and trees turning orange and yellow and cooler days. October means it's time to rake up the leaves, shut up the rose garden, and close things down outside. It means no more guilt about the lack of time spent weeding, or the scarcity of bouquets brought in, or having to worry about keeping things trim and tidy.

And almost October means almost November. November equals Christmas. The only holiday for me.

I love doing crafts, but I particularly love Christmas crafts. Homemade ornaments, stockings, tree skirts, wall hangings. Years ago I got the idea I was going to sell crafts at Christmas shows. I didn't. I sold some things at school, but never found the time to make up enough things to do a show. Then I had the idea I would just sell Christmas things year round. I didn't.

Excited that I feel well enough - and have the time - to make fun stuff.

I was going to do another sugar cookie tutorial today for Tuesday's video, but I'm getting a bit tired of cookies right now. I'll do the tutorial tomorrow instead and more than likely it won't be cookies.

By the look of the tons of fabric squares I received in the mail today (plus the yards and yards of batting that didn't make it into the picture), it might need to be sewing related. 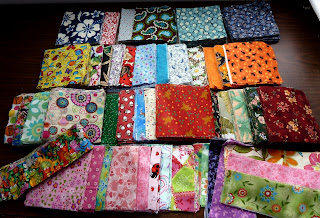