I used to be embarrassed about where my degree is from. At the time I was attending, the university had both lackluster academic and athletic programs.

Before my time on campus, the football program had seen some success during its junior college days in the 1960s and then later saw success in the 70's with a record-breaking quarterback. (A quarterback who, after graduating from college, happened to have worked in my school district for umpteen years.) In 1980 a national championship was won. My husband was working with the team then, and has his own championship ring to prove it. And his championship football team picture and his Letterman's jacket is hanging on the wall downstairs.

Then for the next 15-20 years the university's football team was competitive, but didn't come close to great successes seen in the past.

As students we went to lots of games. We lived just a block from the stadium, walked to the game, and never worried about not being able to get tickets. Not great seasons equaled easy-to-obtain student tickets. Once we graduated we mostly stopped watching the games, and every time alumni conversations came up I kept my mouth quiet.

But now people are proud to have graduated from Boise State, home of the blue turf, ranked number four in the nation as of today.

Even those who don't have any connection to the university are decked out in gear, buying up tickets, and clustered around TV sets everywhere on game days. Just late this afternoon my husband and I had gone out to an early dinner and found fans streaming into the restaurant as we left. (My husband certainly noticed and we made plans to be in attendance at the joint for the next afternoon game.) The grocery store was packed with fans, decked out in their blue and orange, buying up snacks last minute.

It has even impacted us. One of my daughter's classmates and husband's former students/players is a star defensive tackle on the team. I noticed my husband had his alumni shirt on today. We listened to the pregame as we were driving home.

Guess I've jumped on the bandwagon, too. Not too much - I don't have any blue and orange clothing yet.

Today's picture is orange, though. But not a happy orange picture. One of our monarch butterflies somehow met a not-so-pleasant fate and the results were evident on my gravel path. 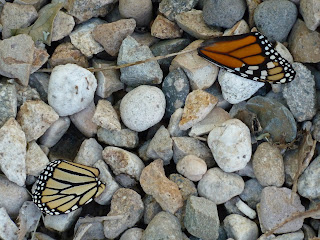