I've always wanted to own a children's bookstore. Like Meg Ryan in You've Got Mail. I kept the idea in the back of my mind until I saw the movie. Since her business went under in the movie, I figured it might not be the best career move so I dropped the thought completely. Then I wanted to be an author. A children's book author. I have a couple rough drafts of stories I've worked on over the years, but haven't moved on either of them.

But something happened last week that made me think I might pick up those rough drafts again. I went to see the movie, The Help. By myself. Yep, I finally I made it to the movies.

I had watched the movie a while back with my husband, but since then I've read the book. I wanted to go back and see the movie again after reading it to do some comparisons between the two. The first time I saw the movie, I was engaged in the story of the lives of the maids. But when I watched it this time, I picked up on something else. The writing. If you haven't seen the movie or read the book, it's about people telling (and writing down) their stories. It occurred to me that I'm doing something similar. Nothing as grand or forward thinking or controversial as what's portrayed in the movie, but still my story.

Some days when I sit down to write the blog, I'm having a bad day and it is prevalent in my writing. Other days I've had some time to think things through and wind up telling stories (all true) about my life. I wonder if I tell enough of these stories I'll feel like a writer. Maybe I still have some of my own life stories to tell. Maybe someday something I say will have importance in someone's life besides my own.

They say if you want to write, treat it as a job and practice it every day. All day long during my real-work job I do nothing but formal writing - reports, plans, grants, and lots and lots of editing. At home, my writing is more casual with the daily blog. I'm getting tons of writing in - both formal and informal - so do I want to write even more so I can finish one of my books? I don't know.  Finishing a project that has been gnawing on me would be a nice thing to have complete.

Maybe my own rose garden's version of Charlotte's Web is a sign. 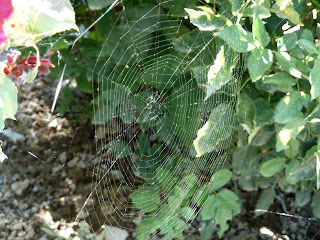