Today's Tutorial Tuesday has us doing one more project for pets. This one is a replacement cover for the Snuggle Safe Pet Bed Microwave Heating Pad. Little baby kittens can't regulate their body temperature until they are several weeks old so these heating discs are truly lifesavers. After warming the disc in the microwave you put it in a cover and it'll keep the babes warm for hours. It comes with just one cover but with baby foster kitties you really need more, especially with bottle babies. You may be washing your one cover every single day so it's nice to have extras around. That way the babies can still keep warm while the laundry is being washed. 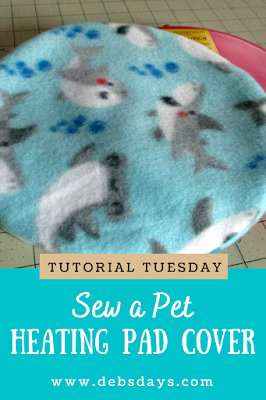 For this project you will need:
Disclosure: Deb's Days is a participant in affiliate advertising programs designed to provide a means for me to earn fees by linking to affiliated sites. This means that, at no additional cost to you, I will earn a small commission if you click through and make a purchase. Your purchase helps support my work in bringing you new sewing and crafting content.
Click here to get the PDF pattern for free! 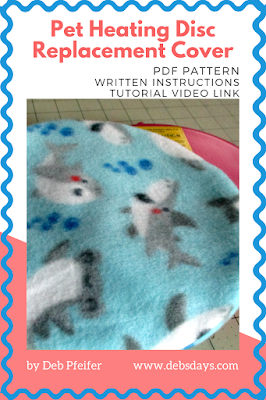 Directions? Find the step-by-step how to tutorial for making your own homemade replacement fleece covers for the Snuggle Safe Pet Bed Microwave Heating Pad right here: 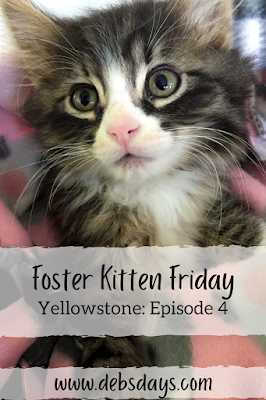 I think our weekly episode of Yellowstone, the Foster Kitty Edition, has now turned into a daily soap opera. Oh. My. Gosh.

Monday: Beth decided to escape and make her Foster Mama go around in circles. It was bedtime and all the kitties were eating their evening snack before bedtime in their two-room tent, but Beth didn't want to go back. She leapt off the couch and decided to instead make a run for it. First she hid under my chair. Then the other chair. Under the dining room table. The couch. Behind the refrigerator. Back under the chair. Other chair. And so on and so on and so on. Round and round we went. By the time she was finally tucked away for the night I'm not sure who was more tired. 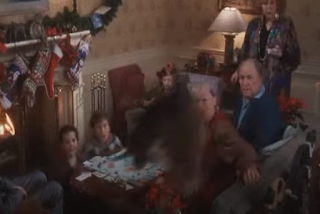 Now I didn't exactly see this squirrel scene from National Lampoon's Christmas Vacation but it was pretty darn close. See that big blob in the middle of the picture? In my case, it was Dutton who flew - yes, FLEW, across the room. From the counter to who-knows-where. Remember, Dutton was the one who was the hisser and lunger and had to be wrapped like a burrito when she first came here. But now she's so sweet and loving. Except when it comes to the carrier, I guess.
Tuesday was also Tutorial Tuesday when I shared how to make a no-sew fleece pet blanket. (You can find the tutorial here.) Kaycee was kind enough to model it for the viewers.
Wednesday: Mr. Ed (as in the husband, not the horse) decided he was going to play cards with the Yellowstone crew.
Want to help contribute to the work I do with foster kittens? I have an Amazon wish list right here. These are the things I use again and again, year after year. With daily laundry and frequent cleaning, items have to be replaced often. I’d love anything you’d be willing to send my way!
Thursday: While Rip wasn't exactly excited he would be heading to be neutered, he was very excited to be placed on the adoption floor. Next stop, a forever home! But it wasn't meant to be. As they were getting ready to do his surgery, the vet thought he might be getting sick and didn't think it was safe to put him under. I headed back to pick him up and saw this poor sight.
I got him back in the car and cleaned up his eyes. Gave him a bunch of loving right then and there. I let him explore a bit and he was soon a very happy camper.
So while he doesn't get to share his looks (and love) with a new family quite yet, he's content to stay right where he is. As are we.
Friday: Up until today, the kitties have had access to the two room tent, the couch, the climbing tree, the bridge (if you haven't seen the clown car video on the bridge you have to watch it here), and a section of the living room floor. But today was the big day. They are now old enough - and well behaved enough - to have run of a big space. Living room. Dining Room. Kitchen. Hallway. And boy, did they use the space.
Let's hope next Friday we've moved back to a weekly episode. This daily soap opera life is exhausting.

For today's Tutorial Tuesday we have a fleece blanket project for pets. No sewing is involved and there are no pesky knots to tie. And bonus - the technique also works for people fleece blankets. 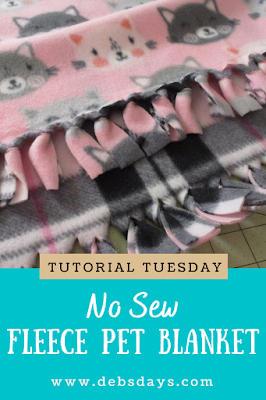 For this project you need:
Disclosure: Deb's Days is a participant in affiliate advertising programs designed to provide a means for me to earn fees by linking to affiliated sites. This means that, at no additional cost to you, I will earn a small commission if you click through and make a purchase. Your purchase helps support my work in bringing you sewing and crafting content.
With those supplies and this video, you'll be off and running. If you wonder if it's foster kitty approved, it sure is!
BRAND NEW! Now available in my Etsy store as a digital download with the written directions, step-by-step photos, and link to the tutorial video. All proceeds from the purchase of this pattern go to supporting the work I do with foster kittens. 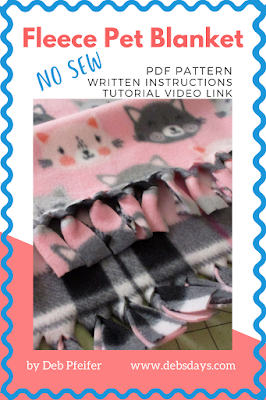 Otherwise you can watch the tutorial to learn how to make your own homemade quick and easy no sew fleece blanket right here:

Looking for sewing and crafting projects for children or pets with supply lists and templates? How about clear, step-by-step how-to tutorial videos?

Click below to get started on your homemade sewing or crafting project for kids or kittens! 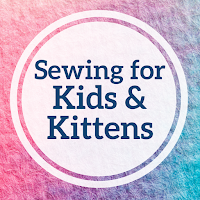 May I ask a favor of you while you are doing your shopping this year?

As you know, as I blog I work hard at providing new crafting projects, travel content, and kitten fostering tips to readers. It's not a paid job and it's just me, myself, and I making sure new "stuff" gets out there each week. I do occasionally make a small - very small - commission with affiliate links.
So here's the favor I'm asking...
If you plan on shopping on JoAnn or Amazon this year, would you mind using my links when you make the purchase? If you do, I'd sure appreciate it!

Click here to see all the sewing and crafting ideas you can find here at debsdays.com! 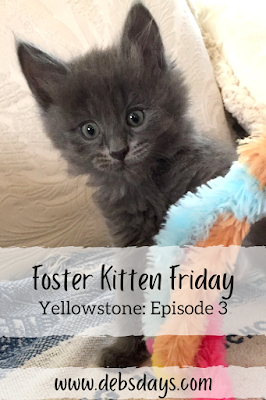 This week's episode of Yellowstone the Kitty Edition is called Follow the Leader because they pretty much stuck to each other like glue.

Work together to ask foster mama to open up the two room tent so we can have our supervised play on the couch? Yep. 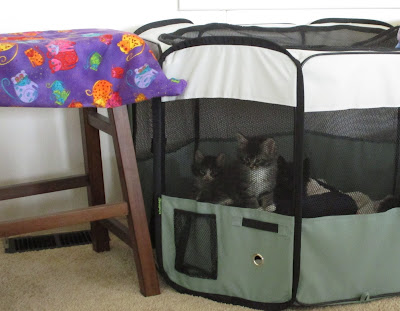 But how will we get to the couch? We have a new bridge! You just have to watch this video of them to find out how they make it work.
Whew, made it! So now we can play together on the couch? Yep. 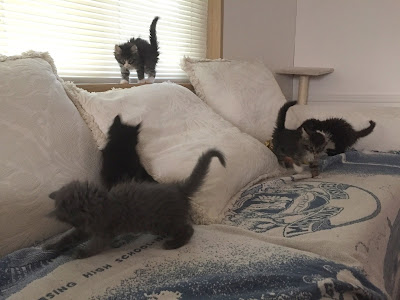 Can we learn to use the cat tree? Yep. 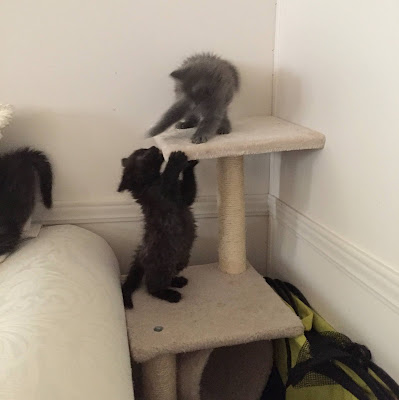 How about pose for pictures? As actors we all need head shots, ya know? You betcha.
Want to help contribute to the work I do with foster kittens? I have an Amazon wish list right here. These are the things I use again and again, year after year. With daily laundry and frequent cleaning, items have to be replaced often. I’d love anything you’d be willing to send my way!
They also tried out all the new fleece blankets I made. If you'd like to make some of your own, I have the no-sew tutorial coming up on Tuesday. 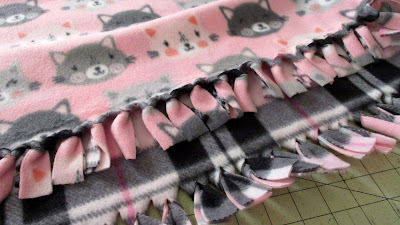 Yep, it was another week of cute kittens all around.
Come back next Friday when one of the cast members has some exciting news to share with us. And come back for more cute kitten pictures, of course.