I'm not a musically inclined person.

The most difficult class I took in college was Music 101. The second most difficult class was another Music class. I think I must be tone deaf or something, because when we had to distinguish between the different notes, I couldn't hear the difference. When other people listen to music they make comments about a particular instrument in the song, but I can't hear it.

But I like listening to music and even prefer it over TV. Don't know what I'm listening to, but I do listen. My tastes have changed over the years, though.

I started out in high school being into pop music. Then I shifted to rock. AC/DC, Foreigner, Rolling Stones. The Rolling Stones had a farewell tour in San Francisco when I was a teenager. I couldn't go, but listened to the SF radio station play each song as the Stones were playing it in the stadium. Being it was a farewell tour, I knew I'd never get to see them for real.

When I was a teen, I moved to Idaho and turned country. Barbara Mandrell, Willie Nelson, Conway Twitty, and Merle Haggard became listening staples.

Since then, I've listened to all types of music with no particular favorite. I've been to dozens of pop, rock, and country concerts and enjoyed Journey (my first concert) as much as I enjoyed Conway Twitty, Sting, The Monkees (oohh, Davey Jones), and The Rolling Stones (yep, saw them live in concert about 25 years after that farewell tour I missed).

But one concert - specifically one performer - has left me disappointed, and I never forgot it. Merle Haggard.

He was one of my favorite country singers and I got the chance to see him in concert not long after I moved to Idaho. But once I saw him on stage, my opinions changed. Merle Haggard was under the influence of something. Alcohol, maybe? Stumbling around the stage, slurring his words, forgetting his lyrics. The worst concert I have ever been to.

I decided right then and there I'd stop listening to him, stop buying his music. And I did. Every time his song came on the radio, I wasn't interested in paying attention.

He gets his second chance tonight, after work. My husband and I are going to see Merle Haggard and Kris Kristofferson in concert in Boise. As for my second chance - after giving away my Elton John tickets back on Day 37 (Marcie told us about the concert and sent us a picture on Day 39), it's time to try and get myself back to a concert.

I hope it all turns out well. I know the second chance I gave my watermelons worked out well. The late cold weather in the spring (like where the tulips were covered with snow on Day 58) made for dead watermelon plants. I purchased new ones later in the season and hoped we'd get watermelons before the first fall frost.

The second chance watermelon are ready to be picked. Let's hope the watermelons are tasty, Merle Haggard is good, and I can make it through a concert again. 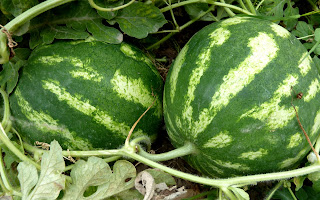