I have been a bit confused about something.

For some reason I had difficulty posting my videos straight to the blog. I should have pursued the issue more, but decided to try and see if I could get them to work through YouTube. When I started putting them on YouTube then posting them from there to the blog, I was able to get them working with no problems. Based on your suggestions (thank you!) I've been filming my tutorials for Tutorial Tuesday beforehand. I either film them over the weekend or on Monday. Then I edit and upload them to YouTube. From YouTube I post them when Tuesday comes around. It was all working well.

Except something weird started happening.

I started getting comments from people about my videos. Comments on Sundays and Mondays, before I ever had the video up on the blog. I also started getting e-mails from YouTube about people "subscribing" to my videos.

So here's what I've figured out so far. All my videos I've uploaded are collected together on a "channel". My channel. People can view the videos on my channel, and (I think) if they "subscribe" they receive notification when I post a new one (even though it's not on the blog yet).

So some folks (don't know if they're blog readers or not) are getting the first look at the tutorials. So it's only fair for me to give you the channel info - just in case you're wanting to be one of those first-look folks. My channel is the debp33 channel. (I must have signed up under a different log-in than DebzDays.) And if you're not a YouTube person, I'll still be posting the tutorial on the blog on Tutorial Tuesday.

Speaking of numbers, have you noticed the map on the right side of the page here? Over 9,000 visitors to the blog so far. Another wow!

The third and best wow of the day? The picture of our Orange Dream rose, of course. 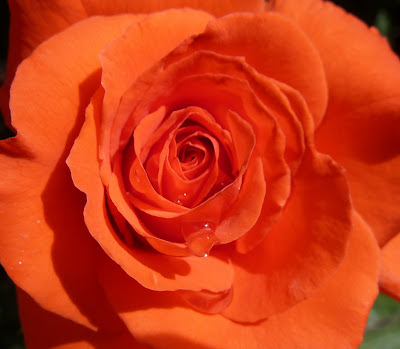