"I don't think so" became my mantra today. Most of the times I was thinking it, but once in a while it just slipped out of my mouth.

Where else would an I don't think so day start but at the Pain Clinic. Again as I sat there in the waiting room I listened to interesting conversations. The things some people say out loud is quite amazing. I'm sure the large doses of pain medicine in their systems certainly have something to do with it.

Surprisingly, I was looking forward to this visit to the pain clinic. This would be the time I would finally find out what's up with my back. Finally maybe have a plan to get some relief, a plan to move forward. Yes and no. My new MRI results told the story.  Bulging discs in every single vertebrae scanned. Arthritis in every single vertebrae scanned. And a very severe case of arthritis in two vertebrae.

I left that mess behind to stop by and pick up my new glasses. I'd been having terrible headaches at school being on the computer all day so a new prescription will fit the bill. I picked up my $320 glasses (that's with insurance), but they were missing the sunglasses piece. Every time I've gotten new glasses for the last 15 years or so, I get the kind that have a magnetic clip-on sunglasses piece. It just so happens the lady helping me pick out glasses a couple weeks back forgot to mention these new ones didn't come with the sunglasses piece. If I want to switch to a pair that does have the magnetic clip-on, I could pay $120 more. I don't think so. But, if I want to get a prescription pair of sunglasses, they'll give me a 50% discount. I don't think so. Or I could pay extra and get transitions, but they won't be as dark as I'm used to. I don't think so. Or I could pay extra and buy a clip-on piece that sort of fits. I don't think so.

I've seen older ladies wear sunglasses that fit over their regular glasses so I went on a search for those. First store, no luck. I found them at the second store. Twenty bucks worth, but if they work I'm willing to pay. I tried two different styles of those big wraparound glasses on. I don't think so became I really don't think so.

Scrap that idea. So I decided to stop and get something to drink for the ride home. In the drive through of Carl's Jr. I was sitting in line, minding my own business, patiently waiting for my turn at the speaker. The gal in the big SUV in front of me wasn't nearly as patient. She started backing up, which made me start backing up. But I guess I didn't back up fast enough because she backed into me. And then she took off. No stopping, no checking, just sped off out of the line. I don't think so! I got her plate number and checked my front bumper. No damage other than a bent license plate.

At that point, getting home was all I wanted to do. I think I just might need a nap.

The best part of the day? Sunrise, of course. 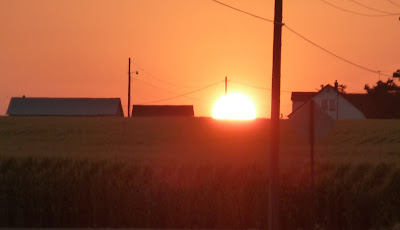