Yet again I did not do what I said I would.

The first thing I heard this morning while attempting to sleep past sunrise had to do with a question about zucchini bread. Zucchini bread I was wanting to cut back on.

My husband was excited he had picked some big zucchini while I was sleeping and wanted to know if I'd make bread today. As clear headed as I was yesterday about giving up the zucchini bread, I was not as clear headed early in the morning. We made zucchini bread. Several hours of baking. Nine loaves. We already have downed almost a loaf. What was I thinking?

And eating too much zucchini bread certainly didn't bode well for the rest of the day. For what did hubby want for dinner with his barbecued hamburger? Homemade onion rings. I've only made them a couple times before, but I made them tonight. Thank goodness they aren't one of my favorite things or I would have probably eaten way too many of those, too.

Lots of zucchini bread, had to finish up the salsa (with chips) and a couple greasy onion rings didn't lend itself to exercising. So I didn't.

Crappy food, no exercise. Why do I not care enough about myself to make the changes I need?

I'm not the only one eating too much these days. Mr. Spider from Day 187 looks like he is about to explode. Bet that moth wasn't the only thing that he's been munching on! 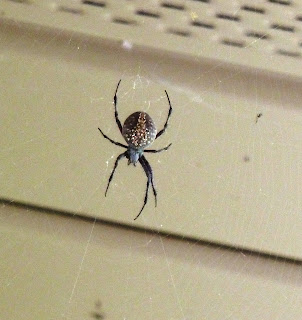