Today was spent watching racing. First Indy 500, then NASCAR. On TV, of course.

We've actually been to the Indianapolis Motor Speedway. It was one of our must-stops on the cross-country trip we took a few years ago. The day we went the Richard Petty Driving Experience was going on. That's where folks plop down a nice chunk of money (like over $100 if I remember right) to ride along in a NASCAR race car for a couple laps around the track. We didn't do it, but could certainly hear how loud those cars can be flying around the track at 150+ miles an hour. We also could certainly appreciate how difficult it is to capture pictures of cars going that fast. I probably used more film on that one day of our trip than any other day anywhere. And half of those pictures turned out to be of an empty racetrack. The cars were just too darn fast!

But I know at some point in our lives we'll go back. And we'll go back on Indy race day. But not this year, and not next, and I imagine not the next. It's one of those things we talk about that we always say we are going to do, (and I hope we can), but things have to improve for me substantially before I can see myself traveling that far again. Just security at the airport is going to be an ordeal for me now! I'll be carrying needles and prefilled syringes - and the full body scan is going to light up like a Christmas tree - 3 screws in the right shoulder, 4 screws in the left, and big chunks of metal in my left knee.

So the Indy 500, the Kentucky Derby, and Mardi Gras all get put on a "someday" list.

As if I don't already have enough issues, with the way I'm feeling again today (going into week 2 of the flu) I can't even get myself out of the house or even out of my sweats. I haven't even had enough energy to fold up that batting and backing I took off of the quilt top a couple days back.

Which works out fine for the kitty. She's not looking to leave the house, either. 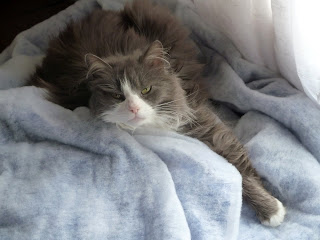