I had a doctor's appointment today and left there in a funk.

I got weighed. I usually decline having myself weighed but was excited today to see how much I lost. I've been exercising faithfully for 37 days in a row. I've been watching what I eat. We cut out sugar a while back, I'm eating salads (only 4 days so far, but jeez), and I've been cutting down my portions. But when I stepped on the scale, I was shocked. I have gained weight. So as I sat waiting for the ever-so-late doctor to show up I was alone with my thoughts. My frustrated, angry, and downright upsetting thoughts.

Then, based on the medications I'm taking, my weight gain, and some other symptoms, the doctor decided to run some tests. Seven different tubes of blood. Not two, three, or five. Seven. I almost got out my camera and took a picture right then and there, but decided there had to be something better in my day than that.

And because of my ten years on anti-inflammatories that are tough on the stomach, the almost two years spent on pain pills and Methotrexate, and some bad stomach issues I've been having, a referral to a gastroenterologist for treatment of a possible ulcer or hiatal hernia.

When I left there for the hour long drive home, I wasn't a happy camper. I had to stop at the grocery store and drug store and was still a grump.

When I got home I read up on how to give myself the new prescription I picked up. (The new Methotrexate injections.) After that I was even grumpier.

So I sat down here to write. Without a taking a picture yet.

As usual, I looked at the tree out the window. My goldfinch from Day 81 was back. But he wasn't alone. On a nearby branch sat another goldfinch. A goldfinch that kept inching closer and closer to my buddy.

I couldn't help but smile at what happened next. 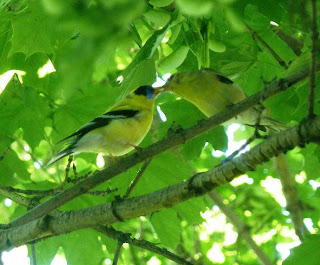