It appears there are more and more times where I find that I don't notice something because it's just been there too long.

Like one of the puzzles I got for Christmas. I haven't opened the box and don't even know what the picture is (although I think there's yellow/orange and green in it). Yet, it's been sitting on the table with my sewing machine since December. Next to the sewing machine I've been using most days for the last couple months. The puzzle box has been in my way the entire time. Sometimes I move it to the left, sometimes I move it to the back. But for some reason, I keep forgetting it's there. Keep forgetting to actually pick it up and put it away. Or even pick it up and see what the picture is. The only reason I finally realized it was there (and didn't belong there) was because I was cleaning up the sewing room and had to dust it. (And believe me, after five months it was quite dusty.)

And like the quilt I have in the living room. The one in the huge frame. Even though I see it there every single day, it's like it doesn't register. I haven't done much more on it. Even yesterday when I was writing on my blog about being done quilting, I forgot all about it. So technically, I'm not done with quilts. I don't know how I missed that big thing in the middle of my living room.

And yesterday's radishes, too. First thing planted, first thing harvested? Nope. How did I forget that we've been eating off the arugula these last few weeks? Spinach? Yep, had that for dinner last night with the arugula and radishes. But I thought radishes were the only thing we'd planted that we'd been eating.

Finally I did catch something before it became too familiar. Every day when I'm typing away here, I look out the window. I might look at the lawn, the rose garden, or the tree right out the window. In one of my glances a couple days back I noticed a tree limb that had busted in the latest windstorm. Which then lead my mind to wander about how we're going to get it out since it's so high up in the tree, we don't have a ladder tall enough, don't want to have the high school kid climb the tree (liability issues), and how my daughter will probably have to climb it or we'll just have to leave the dead branch up there. So every day I glance up there to see if the leaves have completely died yet and how bad it would look to just leave it.

But something yellow was sitting on a branch up there. Something new, not part of the landscape, not expected. So I snapped a picture through our double paned (and somewhat dirty) windows. 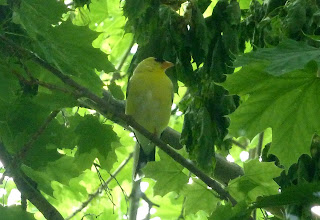