I'm not really into birds all that much. I have a bird book that we use to look up the birds we see here at the house, but we don't ever go birdwatching.

Since we live by the river, we have ducks and geese we see around ever so often. There are some quail in our neighborhood, a hummingbird that has nested in our tree a couple times, the pretty goldfinches that eat at our sunflowers in the fall (and were oh-so-friendly this week), the robins we see every day, and the occasional woodpecker.

But the most pain in the rear birds we have around are the blackbirds. They've capitalized on the holes the woodpeckers have made in the shed. We cover up the holes, but the persistent blackbirds hurl themselves against the covered holes and punch their way through again. They've nested under the eaves in the shed. We cover the hole, they peck and push again and again until they get the hole big enough to squeeze through.

We probably don't have as much patience for them because they're not as pretty as other birds. I'm not sure we'd complain if we found pretty blue robin eggs in the shed. Or if the goldfinches had nested.

But when I've had just about enough of the blackbirds, one of them goes and does this. Sitting still, singing away, just begging me to take his picture as he (or she) is perching on my not yet blooming rosebushes.

Maybe I shouldn't be so harsh to judge. It had better stay away from my shed, though. 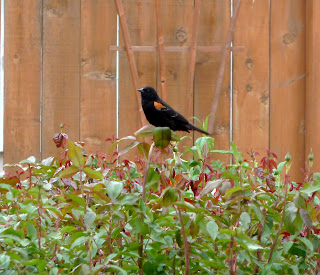