I set a personal best last night. A record of something I've never done before.

It was that I had a salad for two days in a row.

My husband loves vegetables. I don't. To say I hate them would be more accurate. Can't stand salad. Can't stand radishes, broccoli, cabbage, kohlrabi, peas, carrots, spinach, arugula, kale - all of which we planted this year. Tomatoes? Only if they're in salsa. Cucumbers? Only when they are pickles.

The fact that I handpicked the spinach, arugula, and radishes from the garden isn't a big deal. Making a salad from them was no big deal. But the fact that I actually ate some of that salad these last two days is a very big deal. It is quite comical to watch me eat it, though. I can't eat it plain, but I don't like salad dressing. So I mix it into something else we're having. Take a bite of potato and pile the salad on it. Anything to get it down. And down it went two nights in a row.

There are a couple vegetables I wouldn't mind eating so much. Of course they are starchy vegetables that aren't as healthy as the others. At least I'll be able to eat potatoes and corn without grimacing. 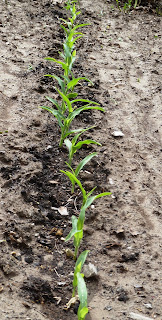