I tried hard for today to be another Sale-A-Bration day like on Day 40.  But it wasn't meant to be. The bad luck at my first stop kind of clouded my day.

This extreme couponing that's getting all the press is hurting those of us who use coupons not in an extreme way. The word is out that one of the gals portrayed on the show committed fraud with her coupon usage, using coupons for items she did not purchase. The show also portrays people nonchalantly clearing shelves with no concern for subsequent shoppers. More and more often, I see people with multiple items in the stores. Not just three or four items of the same items, but 30 or 40 of the same item.

I started my trip off at Albertsons to use some double coupons. I would have walked away with free pizzas, but the shelves were bare. No sale pizzas anywhere to be found. Sounded like coupon use at that store had increased quite a bit. So I got a raincheck (won't help too much since today is the last day for double coupons) and only came away with free Yakisoba noodles and a 69 cent can of enchilada sauce. If I really cared that much about pizzas, I imagine I would have showed up first thing Sunday morning. Oh, well. Maybe next time.

I returned my bathroom faucets from Day 56 (so I guess I made money there - except I then turned around and bought two climbing roses), and had to pick up my Enbrel injections (got those free because of the prescription assistance so I didn't have to pay $2037.09).

Shopping wasn't my only activity today. My mom has been telling me about this Mimi's Cafe Carrot bread. I've never even heard of Mimi's Cafe, but I guess they're all over the place. Their rich dark carrot bread is supposedly unbelievable rich and delicious. I checked around on the internet and found a recipe here on how to make it. Even though I said no more baking so we can cut back on the sweets, I decided to try it. For those of you who have had this bread before, is it typically this dark?

Rich? Oh, yea. And full of carrots, raisins, and nuts. We certainly won't be eating all of it ourselves. 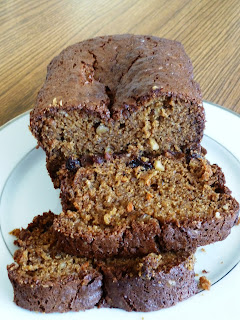