What a day today was.

Our poor kitty. She didn't come in last night. Lately she's been staying inside when we're inside and going outside when we go outside. She was out with us yesterday, but wasn't around when we went back in. She doesn't wander too far, so we figured she'd show up again at some point. By night time, she still hadn't popped up. Sometimes she finds a good sleeping spot and stays there so we still weren't too worried. Early this morning she was at the door and hubby let her in. I didn't see her until I got up and noticed she was covered in mud and leaves. And she had a bit of a limp. (I guess hubby missed this?) I cleaned her up, she ate and drank a bit and then headed downstairs to sleep. I checked on her and she seems fine except she's still favoring one leg over the other. There's been a tomcat around the last couple nights, so I have a feeling she might have tussled with him (she's fixed though). I'll be keeping a close eye on her. She doesn't appear to be in pain, but maybe a vet trip is in the very near future.

Then we spent a couple hours trying to get our irrigation pump working. Now that the garden is planted and we only have water in the ditch Thursday-Sunday it's important we get it going. We put in a new sprinkler system last year, but this year it's not wanting to start up. Finally hubby got it going for a few minutes, but then it went out again. We may need to be making an (expensive) call to the sprinkler guy.

When we gave up on the sprinklers, I went to check out the strawberry bed. There are blooms! But there are also weeds. Too many for that pretty bed. I may be out tackling those in the next few days.

After looking at the strawberry bed, I noticed our clematis needed to be tucked in the trellis a bit better. As I was grabbing vines and moving them around (unfortunately without my gloves), I felt quite the sharp pain in my finger. I moved it away fast, but not before I got stung /bit. Not sure if it was a wasp or a spider, but my finger throbbed, swelled up, and turned red. I immediately took some Benadryl (since I tend to have issues with wasp stings), but my finger is on fire and is swelled up like a sausage as I type this.

So I took a picture of my pretty purple violets blooming under my soon-to-be-blooming roses and called it a day. No more outside play for me today. Guess today's Kentucky Derby and NASCAR will be how I'll spend my afternoon. 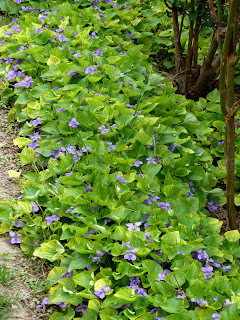 Exercise update: Despite the sausage finger and Benadryl daze, I managed to make it 20 days out of 20. I've worked too hard at this exercise streak to break it now.