This may sound really weird, but the night before a cruise I don't get nearly as excited as I used to. I kind of equate it to going to the movies. Sure, you're happy you are going to see a movie, but you've been to the same movie theater before, had to drive through the same traffic to get there, and probably parked in the same area of the parking lot. Even if you go to a different theater, you know the concession stand will be after the ticket booth but before the actual theater. Once inside you might find a new spot to sit, but most likely you have your favorite go-to seats.

Cruising is like that for us. We use the same taxi company to get to the airport, usually fly the same couple of airlines to some of the same embarkation ports, and get on ships we've been on before.

Which is probably why this particular cruise DOES have me more excited than usual. While we've left from Civitavecchia before (last year) and cruised on the Sapphire Princess before (several years ago), the ports are new. Every single one of them. Which makes the tours we're taking new to us, the sites new to us, and the adventure new to us. After having spent two months this year on the Royal Princess going to the same places we had already been dozens of times (Alaska and Mexico) I'm happy to say I think new is going to be a good thing for us. (Now hubby won't agree. He would rather be sitting in his rocking chair with the TV controller in his hand than be on any cruise or on any trip anywhere. But I know what's good for him, and this will be good for him. Trust me.)

As part of our new things, we did get a walk in after breakfast. A hill was involved and one of us worked up a sweat. Oh yeah, and got a peek at our ship. We're on the right and the Sky Princess is on the left. 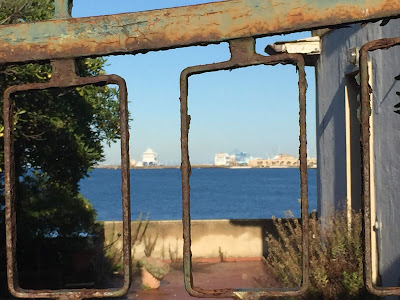 But as you would expect, our day didn't end there. We enjoyed just a bit of time on our little patio off our room... 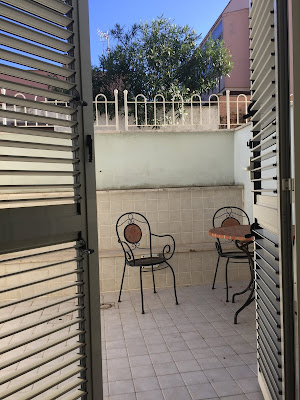 Before heading to port and boarding this beauty... 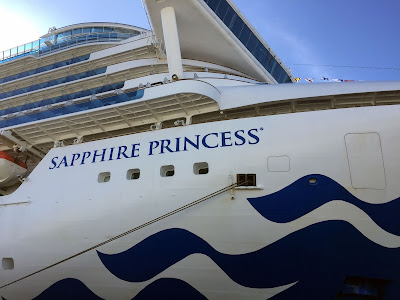 and seeing this behemoth ship docked across from us. Now little Miss Sky Princess doesn't look all that large in this picture, but believe me, she is. When we were in the shuttle to the port we could tell the difference between the two ships. Ours looks like a little baby compared to her. I'm hoping once one of us starts pulling away we will pass a bit closer for a better look. 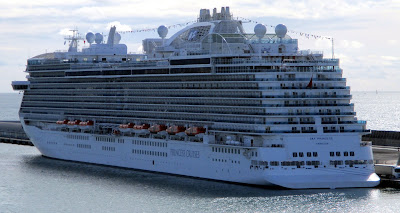 We were able to board the Sapphire immediately, but cabins weren't quite ready. No worries for us. We'll just say hello to our home for the next 27 days. 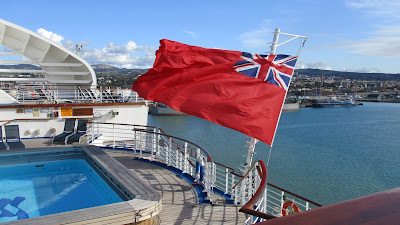 I'm not sure of our plans for the rest of the day. A nap before muster drill perhaps?

One last thing - you know I live my life (and this blog) through photos, but because of the limited number of Internet minutes on this trip the photos themselves may not make it into my posts until I get free port WiFi. Patters also won't be scanned and uploaded this time around. I will hold onto them so if you have questions, do let me know by using the Contact Me tab up top.

See you tomorrow in Naples!