Today we were given landing cards for immigration, picked up on Deck 4 before we left the ship. They each had a unique number assigned to them. (I’ve marked out my number.) We didn’t have to show them to anyone but I’m guessing in case something came up ashore we would have to produce them? 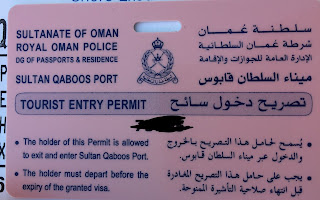 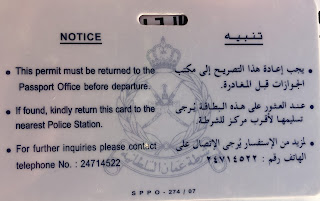 Today was the last Hop on Hop off bus tour of our trip. We weren’t the only ones who thought the early 8:15 AM bus would be a good idea. We were crammed in that bus like sardines with only one seat unoccupied. We’ve had many instances where folks aren’t willing to give up a seat to a disabled person so I was worried about E not being able to get a seat downstairs. Thankfully the folks working the bus took pity on him and made sure he got a seat not only on the bottom level, but right up front. Being they set aside both seats for us, I felt obliged to sit next to him instead of heading up top like I usually do.

That makes all of today’s pictures taken straight out of a bus window, with just a few from the side window. As I was taking them I was bummed, thinking they weren’t coming out all that great. Now that I look at them, I realize it gave me a great perspective of the city. Both you and I can sit back, pretend we’re on a Thanksgiving drive to grandma’s house, and enjoy a tour of Muscat, Oman. (And yeah, I took a lot of pictures on the way. Happy Thanksgiving!) 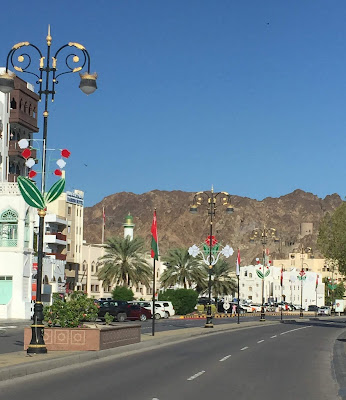 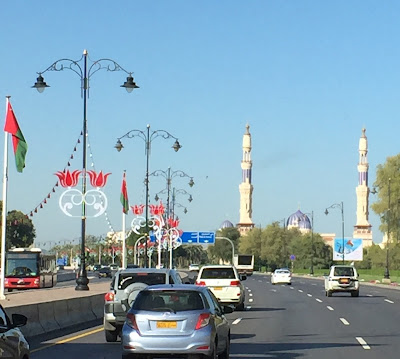 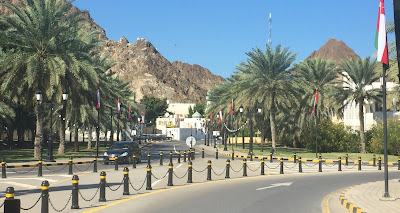 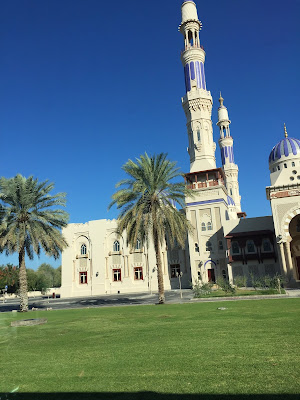 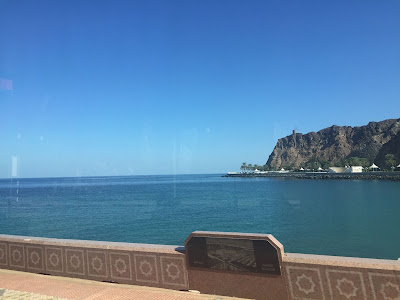 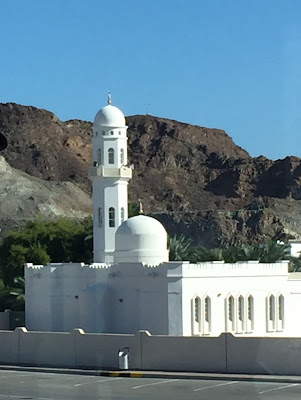 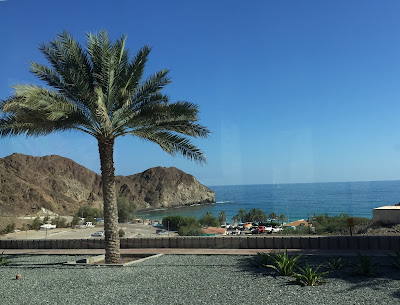 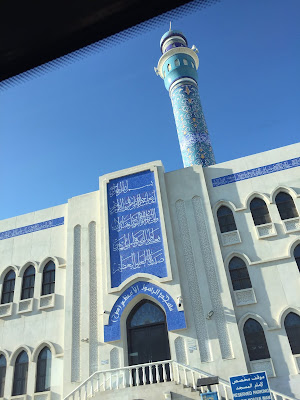 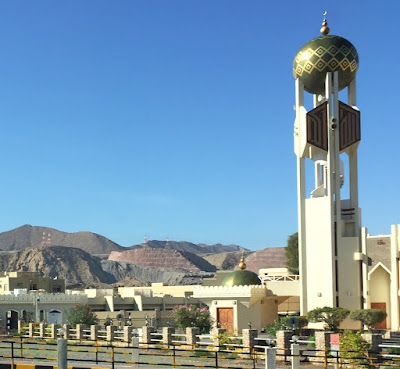 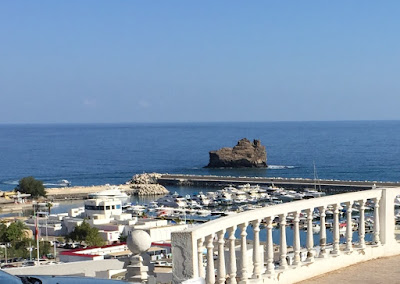 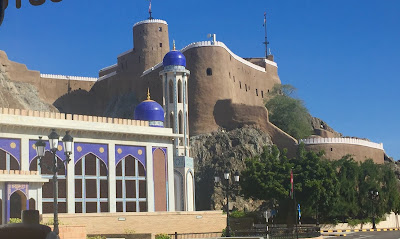 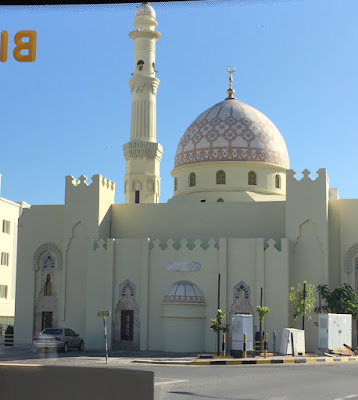 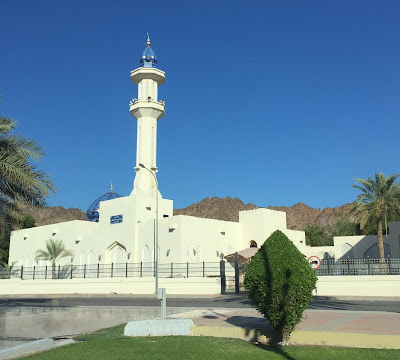 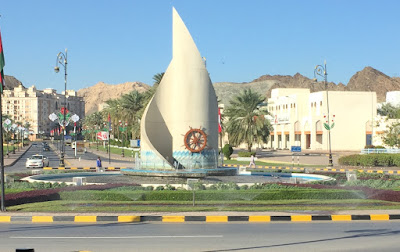 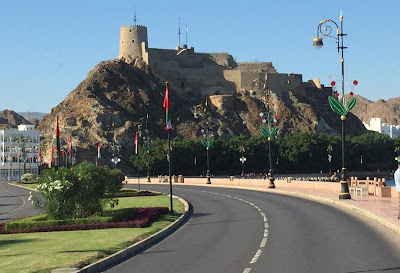 Did you know Oman is ruled by a Sultan? I didn’t until today. His picture is everywhere around the city.
Edit: Sultan Qaboos bin Said Al Said passed away just a few weeks after our visit on January 10, 2020. He was replaced by his cousin Haitham bin Tariq Al Said. 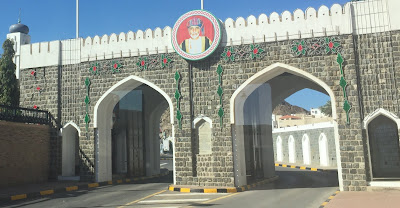 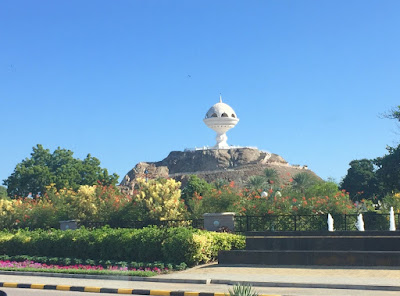 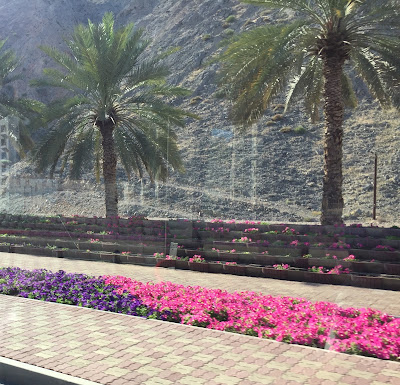 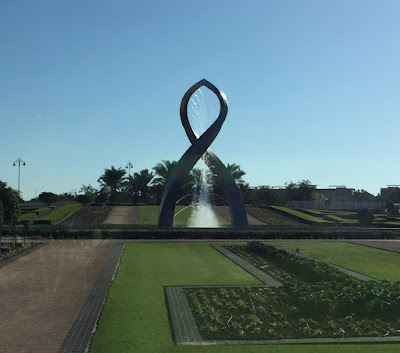 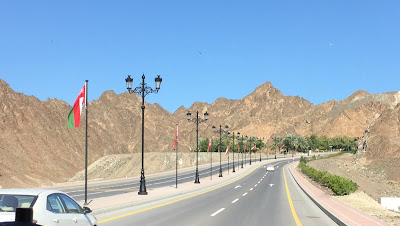 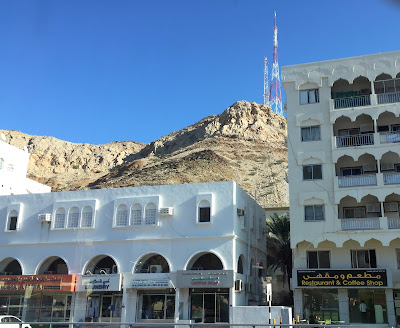 There is only one red HOHO bus route...

but it gave us plenty of opportunity to see the city from one end to the other. Muscat most definitely felt (and looked) more Middle Eastern-y to us than anywhere else we’ve been before. The dress was predominantly traditional for both men and women. The city was older looking, with all buildings white or cream in color. (Buildings can’t be built higher than eight stories and have to adhere to the color scheme.) Suqs (souks/marketplaces) were busy and full of locals. We knew we certainly weren’t in the United Arab Emirates anymore.

We move clocks forward yet another hour tonight. Ugh. But tomorrow we’re off to a sea day and that makes it a woo hoo!