After a few more bumps in the night where we lost some items to the floor (TV controller, dang mini bottles from the mini bar that still hadn't been traded out), the waters calmed early in the morning. Whew.

The ship was a bit delayed arriving in Santorini, but by 10:30 the arrival announcement was made. Santorini is actually formed from a volcano. The ship stays out in the caldera and passengers are tendered back and forth to shore. Typically you would find a ship anchoring when offshore, but the water is so deep an anchor would be of no use so the ship drifts and uses the thrusters to somewhat stay put. (At least that's what our guide told us.)

If you were doing your own thing in Santorini, you went to a different dock than those on ship excursions. On-your-own people were dropped off at the bottom of the city of Fira. There are three ways to get out of the port area: walking, donkey, or cable car. Take a look at this switchback walkway - you have to make your way up all those stairs to make it from the sea to the city up above. Oh, my.
For those on ship excursions, we wound up at another dock, the only one accessible by bus. Still, we found ourselves with a not-so-direct route out of the port.
My tour was an island drive. Boy, did we drive. Unfortunately, it was a soon-to-be stormy day with rain and thunder and lightning. We made several stops for photo opportunities, but some of those had such hard downpours it wasn't worth stepping outside. You'll find some of my photos are taken from inside a bus with raindrop-filled windows. 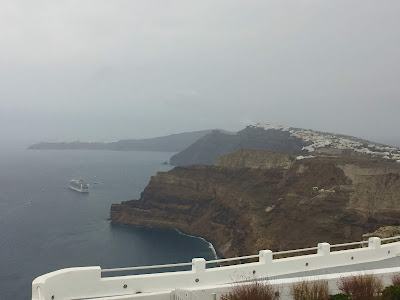 It was a bit of a bust of a day. From what I hear, the colors are just spectacular on a sunny day. I'm glad I went, but not sure I'd do it again. With our bumpy last couple days on the ship, a bumpy tender ride over the island, a drive with a couple hours of switchbacks and curves, and another really bumpy tender ride back, my head is spinning. While I haven't been sick to my stomach so far this entire trip, my head is not happy right now. And although the ship is somewhat stationary at the moment, trying to concentrate on the words on the screen is a bit tough so I'll be cutting it short tonight.

Tomorrow we have Rhodes, Greece. With a clearer head, I hope.