Civitavecchia, Italy it is!

When we stripped down to our underwear and climbed into bed at 4:30 on a Friday afternoon in Italy we fist bumped and high fived each other.

I guess that sounds like it’s about to get a bit naughty. I better back up and start from the beginning.

Yesterday and today were going to be big days for us. And they were. A big 24 hours, really. While I'd like to say everything was absolutely perfect, if you travel a lot you know travel days are not without bumps. The bumps we encountered over the last couple days made us realize The Universe really is working in our favor.

It started with our taxi driver arriving early to pick us up.
Which led to an early arrival at the Boise airport.
That gave me additional time for the I'm going to reach around the inside of your waistband and the spread your legs wider so I can feel the inside of your upper thighs pat down I get every time at the airport.
Which allowed us enough time at the gate to check and recheck to see if any of our Lufthansa flights were cancelled. (They weren't.)

We also had plenty of time in the Denver airport as the Lufthansa systems were down. No printed boarding passes, no new seat assignments, and no passenger manifest. Thank goodness we had our boarding passes printed in Boise! Every passenger had to be checked in manually and physically checked off a list before boarding. Whew, it took a long time.

Since we had a 9+ hour flight ahead of us, we were able to make up time in the air.

We had time for a dinner and breakfast onboard. Hubby loved the BBQ beef, polenta, and green beans for dinner. We only had the fruit and half a roll at breakfast and by the looks of the eggs you can probably see why. 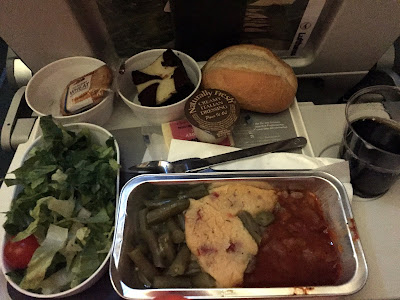 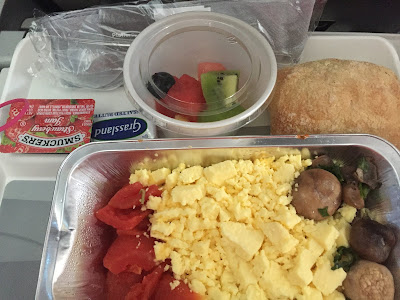 Before breakfast we saw a beautiful sunrise over Ireland from the camera on the tail of the plane. We had three different views we could look at from the monitors on the back of the seats.
A screen that actually wound up again, like last year's Air Alitalia flight, about six inches from my face. Today (well, really today and yesterday) it was due to the lady in front of me who reclined all the way throughout the entire flight. Even when she was up walking the cabin and standing up and using the restroom multiple times and reading, and well, you get the picture.

Before we arrived in Munich, announcements were made about multiple cancelled Lufthansa flights. We listened carefully (first in German and then in English) and didn't hear our Munich to Rome flight on the list. We doubled checked again upon landing and we were good! But not so good for all these other people. I took a shot of one of the screens, but there were several screens full of multiple cancelled flights. This photo shows the cancellations for just 35 minutes of the day. 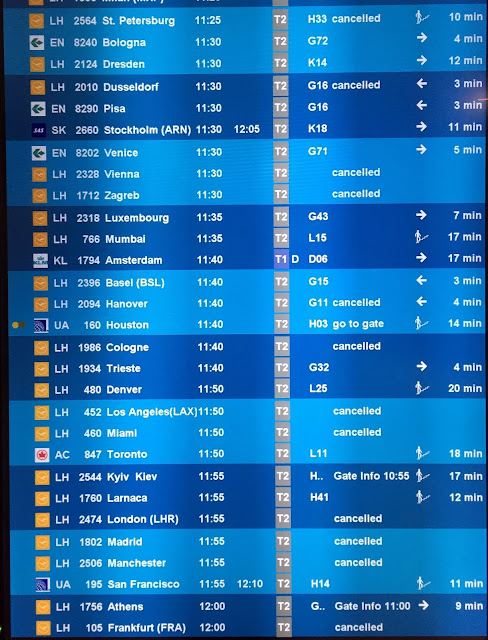 In total Lufthansa cancelled 600 flights today because of a strike, with most of them coming in and out of their hubs in Munich and Frankfurt. All those cancelled flights left us in a very quiet terminal in Munich. I headed down one way to see the gates. Empty. 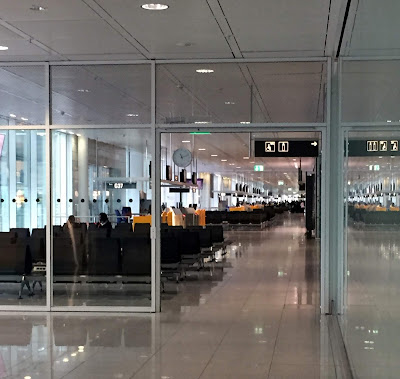 When we boarded our plane, I looked the other way. Empty there too, but for one lone plane. (And ours, of course.) 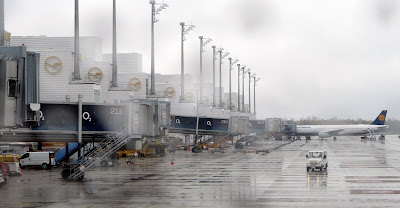 If you wanted a seat at a restaurant in the terminal in Munich today would have been your day. Shops had no lines, either. But the biggest bonus came for hubby for two reasons.
1. The mobility assistance services provided at the Munich airport, according to hubby, were the best he's ever experienced. Ever. At anywhere in the world, including the US. (Actually, the services provided disabled people in airports in the US are among the worst we've encountered.)
2. Every person who dealt with us pronounced our last name correctly. It's Pfeifer, pronounced like "Fifer". It's a German name and most people everywhere else butcher the name. But we're in Germany and they know how to pronounce it!
When we arrived at the Rome airport, we already knew our plans would be different from last year's. Last year we grabbed a bus and headed to a hotel in Rome for a couple days of sightseeing. This year we knew we had to preserve hubby's stamina so we are staying in a hotel near the port. They were able to arrange transportation from the airport to the hotel, even. Although again this year, we thought we were on the Autobahn with the speed the driver went. I couldn't see the speedometer from where I was sitting but I'm certain we were doing over 90 MPH. I tried taking pictures out the window and nothing showed up on the camera but blur.

It was magnificent - wide and full and brightly colored. And a double rainbow even started to form. The pictures taken through a shuttle window while zipping down the Italian Autobahn certainly don't do it justice. 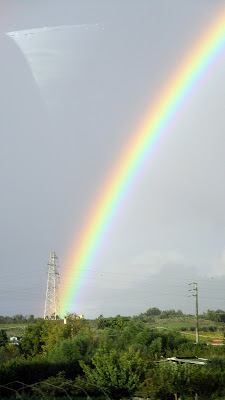 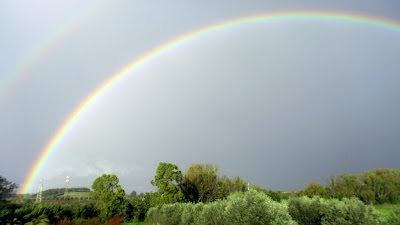 We arrived at our hotel after 24 hours of travel with absolutely no sleep on any of our three flights (full disclosure - hubby did nod off a couple times in the front seat of the shuttle going 90 MPH) so we were exhausted.

And excited. We made it! We stripped off our clothes down to our underwear and climbed into our hard double sized bed and couldn't have been happier. (Hence, the fist bump and high five.)

Hanky panky? Nope, nappy nappy.  A few hours of sleep had us ready for dinner at the hotel. I counted the steps from our door to the restaurant doorway. 13 steps. With a day like today, I think 13 might just be a lucky number for us.

Tomorrow we have no plans but to just relax and recharge.
It may be 2:45 in the afternoon at home but it's 10:45 in the evening here in Italy, so buona notte!