Today was another day of new learnings.


The ship held a Pirate Drill Presentation in the Princess theatre twice and we all were encouraged to send at least one person per cabin to the presentation. While it was a short 20 minute presentation, allowed no questions, had slides that were too hard to read, wasn’t about the Pirate Drill (it was actually entitled a Maritime Security Briefing), and was presented by a security officer who spoke pretty softly, it still was informative. 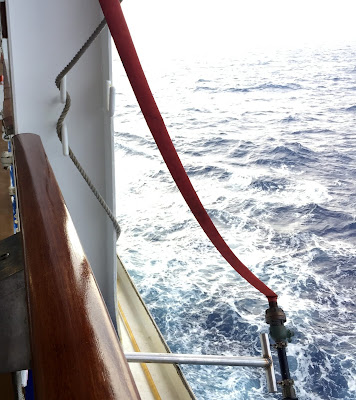 It was a lot of information crammed in the 20 minute presentation, but it was a good overview. More than one person wished they had a map in hand to look at the areas more carefully. Us included.

The rest of our day was spent doing not much of anything. We have Aqaba, Jordan coming up tomorrow. While I would have loved, loved, loved to go to Petra, being it is a full day excursion with lots and lots and lots of walking, there is no way E can make it. My second choice was snorkeling the Red Sea, but in the interest of his comfort, I canceled the excursion before we left home. Now we’re left with taking the shuttle from the ship to the city center and possible grabbing a city tour.

But E has come down with a bit of the cruise cough and isn’t feeling so great. He tells me he’ll be ready to go tomorrow, but I’ve lived with the man for 36 years and I know his patterns of illness. If he was still teaching, I would expect tomorrow he’d be calling a substitute to cover for the day. So I may be waving at Aqaba from afar and spend my day at the pool while he spends it in bed. We shall see.