Did you know Jordan is bordered by some scary territory? You have Syria to the north, Iraq to the east, Saudi Arabia to the east and south, and Israel and the occupied West Bank to the west.
I was excited to get out and explore Aqaba today. E let me know first thing this morning he was feeling better and ready to go. Based on the amount of coughing and snoring he did last night I had my doubts, but whatever. We were up early as usual (as evidenced by the sunrise photos) and talked about how to dress for the day. He headed off to the spa to take his shower and I spent some time on the Promenade deck watching all the passengers heading to their buses.
We met up back at the cabin at 7:30, the time the shuttles were scheduled to run into the city. I had cell service in the cabin so I looked up our options today. Aqaba has a red city tour bus with scheduled start times. We had some time before the first route began so E took a little lie down and I tried to figure out how much money in which currency to exchange into Jordan Dinars. We had some Euros left (1 EUR = .82 JOD) as well as plenty of US dollars (1 USD = .71 JOD). When I had that decision made, it was my shower time.

When I came out, E was sound asleep. Snoring. Covers pulled up all the way to his chin. Of course, it was necessary for me to wake him up and ask, What the hell? Actually, that’s what I wanted to say but being the good wife I am I instead asked, Are you feeling okay? The breakfast then shower combo + the night’s coughing left him feeling not so great. Ugh.

So I did not dress proper for the day and instead put on a pair of pull on capris, looked in the mirror, grabbed a pair of scissors I had and made a cut in them above the knee.

See, we had both bought a pair of men’s swim trunks for $1 each on a Walmart after-season clearance rack. E wears his as shorts and I figured I’d use mine as swim shorts to cover up my bum in the pool. At $1 I didn’t waste time trying them on at the time. But as I now realize, men’s swim trunks don’t necessarily fit a woman’s body. While I wore them in the pool the other day, they were quite uncomfortable around the hips. Since the weather has warmed up and should continue to be warm for our next few weeks I needed to figure something out. Hence, the chopping of the pull-on capris.

I used a pair of child’s scissors from when my daughter was in first grade (she’s 31 now) and a sewing kit picked up in a hotel probably 20 years ago.  I folded a hem and did a quick whip stitch and presto! A pair of swim bottoms fit for a woman. 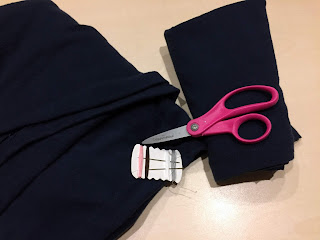 The rest of my day was spent in the pool while I consumed a couple adult beverages. And E slept through all but a half hour of it.
Tomorrow is our anti-piracy drill. By looking at the High Risk Areas and the areas we are sailing, I understand why.
Tomorrow is also the first of six straight sea days. I’m not sure what the Internet will look like for those days, but if I have access you know I’ll be right back here with something to say.