Heading to the Suez Canal

As I was researching the Suez Canal experience from a cruise passenger’s perspective I found all kinds of conflicting information.
*One said the ship is locked down and goes dark, with no one allowed outside or on the open decks during the day or night. This person said all curtains had to be closed and no lights allowed at night and passengers were pretty much confined to their cabins. For several days, actually.
*One said they were forced to endure pirate drills where they were all required to huddle in the hallways.
*Another said the Canal is one way so it took forever for the Canal to open in their direction. And they had to time it so the ship could leave in the cover of night to stealthily avoid the pirates.
*Yet another one said cruise ships have heavily armed guards onboard with water cannons set up on the open decks in case of attack.

In most of the cases I read about, the time in the Suez Canal sounded like a dire and pretty scary experience. I’ve traveled enough to know both cruise passengers and the news media exaggerate and dramatize certain things around cruising. I took what I read with a grain of salt so I was very much looking forward to the transit on this ship to see it first-hand for myself.

Side note: I do have two trusted sources I rely on when it comes to cruising. They aren’t just random people on the Internet and their information is highly accurate, engaging, and entertaining. Yellow Fish Cruises and Vickie and Bernie Travel blog live from their cruises. Each of them have a ton of cruising experience, and thus have a ton of information - with plenty of photos - on their blogs. And guess what? They are both right now on different ships in different parts of the world, blogging live as we speak. Be sure to check them out! Unfortunately neither has been through the Suez Canal so I had to look elsewhere for information this time around. (Thanks a lot ladies, leaving me alone to sort through the crappy information on the Internet. Just kidding. Sort of.)

After our first scheduled day of the Suez Canal transit I can report…
It was pretty much like a regular sea day. We had t-shirt sales and trivia and fruit and vegetable carving and Pub Lunch and music out at the pool and the don’t-hog-the-loungers notification and evening shows. E and I had our 6 AM breakfast (3 days in a row!) and while we missed the moment the sun rose over the horizon, we were walking the Promenade Deck in time to still get a nice view. 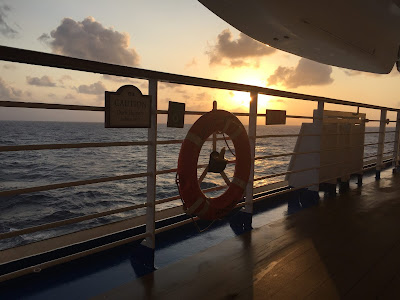 I spent time swimming and sunning, and we both spent time napping.
The only noticeable difference in the ship’s activities was by evening we had arrived in our staging area where we would wait for other ships to gather in preparation for our transit. We will be in the southbound convoy of ships beginning tomorrow at around 4 AM. With sunrise not long after 6, it doesn’t sound like cover of night to me.

Pirate drill with passengers huddled in hallways? Not yet, but I did hear there may be one after the Suez Canal as we will be entering some more potentially dangerous waters.
Relegated to our cabins? Not so far.
Lights off everywhere around the ship? Not yet.

Excited to see what tomorrow brings!