I was hoping to be up early to get good pictures as we arrived in Napoli (Naples). We’re in an inside cabin this time around, so we turned the TV on to the webcam station last night so I could be awaken by daylight instead of an alarm. It worked great up until the time it didn't. We had thunderstorms throughout the night so the TV kept flashing white, making me think someone was turning on the light. Good thing hubby was snoring or I probably would have been blaming him for it. After a couple hours of being startled awake, the TV had to go off. Which should have meant I set an alarm. But I didn't so we slept. And slept. And slept.

We knew we didn't have to be anywhere until later in the day, anyway. With hubby’s stamina being the number one thing on my mind these days, I made sure today’s tour was an afternoon one so he had plenty of time for morning rest. We usually don’t take Princess tours but this cruise we are.
Being in a big group of cruise ship passengers in a confined space isn’t exactly our idea of fun. But Princess tour options typically pick up and drop off closer to the ship and keep pretty close to scheduled times, both things we need in order to keep him (hubby E) comfortable. I can’t wear the man out – there are still too many places around the world I want to see!

It wound up being a great tour. We saw a lot and I took a ton of pictures that I'll add later. Here's just a taste. 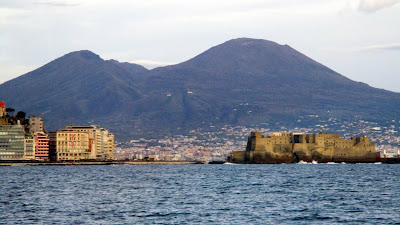 While we didn't get a chance to have pizza in Naples today, we still have a chance in Sicily tomorrow. will go to Alfredo's tonight instead. The Captain just announced tomorrow's port will be closed because of bad weather and we'll have a sea day instead. He tells us it'll be a bumpy one with the 50 knot winds. Hope it's not too bumpy by evening as it's formal night (just think about that champagne glass tower!) and we have dinner in the steakhouse tomorrow night  - in the back of the ship. It could get interesting.