A Relaxing Day in Italy

No fewer than three times during the middle of the night last night did I sit up in bed and say in a loud voice. Ow, ow, ow! First it was the left calf. Later on it was the right calf. And if those two body parts weren't enough, the left foot got into the action even later in the night. Dang it hurt and I was so tired and discombobulated in the night I couldn't even forms words as to what I had going on. I had to look it up to remember - they were Charley Horses. It has been a good many years since I've had one (and never three in one night) but I'm guessing the 24 hours of traveling had something to do with it. So Dr. Deb prescribed herself lots of glasses of water, a banana for additional potassium, ankle pump exercises to increase circulation, and feet above her heart today.

As today was already a planned relaxation day it was an easy prescription to follow. The hotel we are staying in has a free breakfast so we started our morning by taking our 13 steps to the restaurant. I always find free hotel breakfasts fascinating. Not because they are free, but because the variety of foods we find depends on the part of the world we are in. Today's was heavy on the sweets. 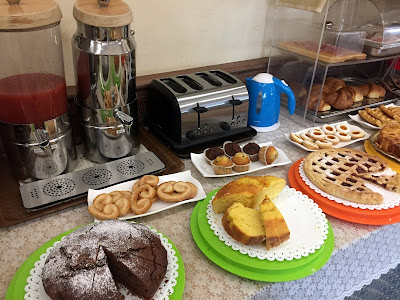 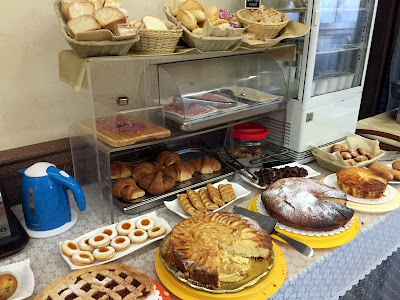 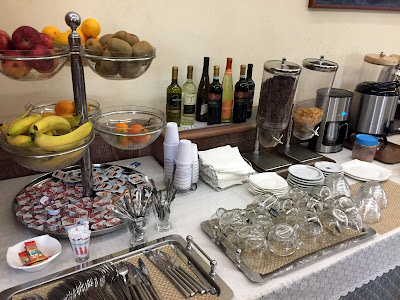 I'm a mostly-protein gal so I had just a couple options. 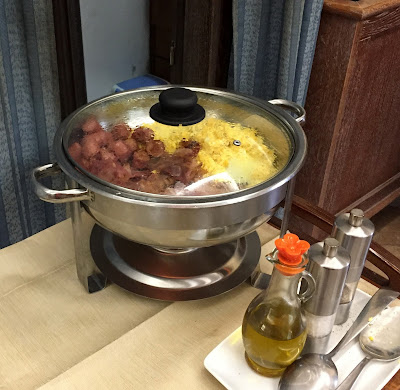 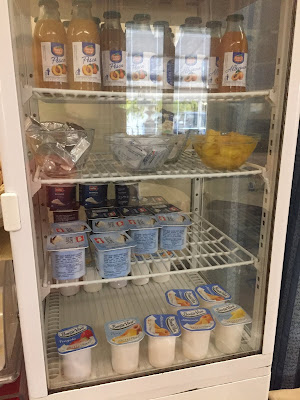 I'm also a gal who likes to taste a little bit of several things but not too much of one thing (if that makes sense) so I was careful not to overdo it with all the choices available. 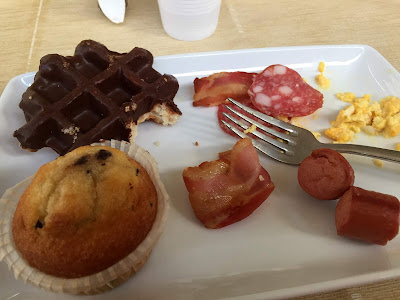 In my choices I found something unbelievable tasty. Something I've never had before; something I've never seen before. It has probably been around the US for a while but since I don't do many carbs I wouldn't know it if it was. This chocolate covered mini Belgium waffle thingy was one of the best things I've eaten in a very long time. It was like an old fashioned doughnut batter made into a mini Belgium waffle shape with a chocolate coating. Oh. My. Gosh. 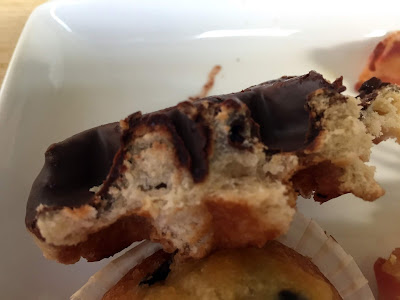 I also discovered this salami and an oh-so-flavorful roll for breakfast. Another oh my gosh moment. 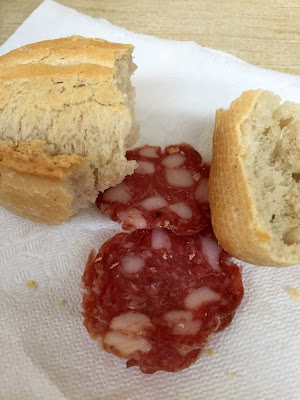 Hubby and I talked about taking the couple blocks walk down to the water after breakfast, but it was pretty chilly and windy outside so we hiked our 13 steps back to the room until things warmed up some.

Which is where my I don't care day started. I think it was the combination of being carbo-loaded and hubby deciding to watch Italian TV in the room. The Italian TV channels were fun to watch, but then he found a sports channel he stuck with. I decided the sports channel watching was a good time to close my eyes for a tiny bit.

And I soundly went to sleep.

The next thing I knew, there was a knock on the door from housekeeping, coming to clean the room. Hubby grabbed the door, I thought in my mind I don't care about the room being cleaned and without even thinking about it, went right back to sleep.

Later on, a thunder clap woke me up. We had left the patio door open so it was loud. But I thought I don't care. And went right back to sleep.

Then we had the big birthday party we heard in the restaurant. Singing Happy Birthday in Italian. It woke me up, I thought how nice, then I don't care, and went back to sleep.

So there went the day. We both got plenty of rest, skipped lunch (the restaurant here isn't open anyway, but I did have my banana to add potassium into my system), drank plenty of water, and never made it down to the ocean. Even the walk became an I don't care. Heck, we're going to be on a cruise ship for 27 days so we'll see plenty of water.

At precisely 7 pm we headed to the restaurant for dinner. Another I don't care happened there, too. Just like last night, cruise passengers were having a pissing contest talking loudly from across the room about who is more important and how many cruises they've been on and blah, blah, blah. (If you cruise a lot you know the kind of people I'm talking about.) We had more of those loud folks in the restaurant tonight, too. But not long into the meal a large family of locals showed up for dinner. About 20 people in all, speaking Italian and having a grand time. It was fun listening to their conversations and enthusiasm even though I could hardly understand a word they were saying. Much better than having to care about being distracted by the annoyingly loud braggart cruise passengers.

It wound up raining most of the day and into the evening. And guess what? I don't care. I'm in Italy having a great, grand, magnificent relaxing and mind, body, and soul boosting day.

Tomorrow we're joining the Sapphire Princess. The big, beautiful brand new Sky Princess will be here in port with us, too. I hope to get a good look at her as well. (From the outside only, of course).

I'll work on keeping Charley and his Horses in the barn tonight and will see you back here tomorrow!