My sugar cookie icing is quite simple. Powdered sugar, vanilla, and milk. I stir the ingredients together until I get the right consistency. If the icing is too runny it falls off the edge of the cookie. If the icing is too thick it won't flow through the ziploc bag. But last night I learned even more about icing. Not the cookie kind, either. Being that I've never been to a hockey game before, I actually learned all kinds of new words. 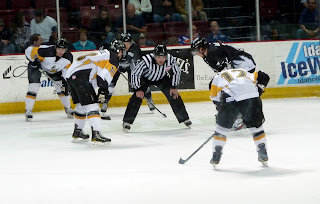 I learned that if a hockey player shoots the puck across the red center line and the other team's red goal line without the other team touching it first, there's a word for that. Icing.

I also learned that icing results in a face-off. That's where the puck is dropped between two players, kind of like a jump ball in basketball.

A bodycheck is when a player uses their body to slow down (and in most cases, slam) the opponent against the wall. Sometimes those bodychecks turn into fights. And those fights appear to be encouraged.


When one of the team's players gets a penalty and has to go to the penalty box, the team can be outnumbered by one or two players during the game for a power play. 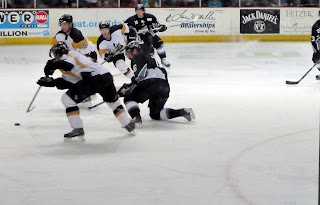 I learned the goalie gets beat up by the puck. Just check out all the black marks. 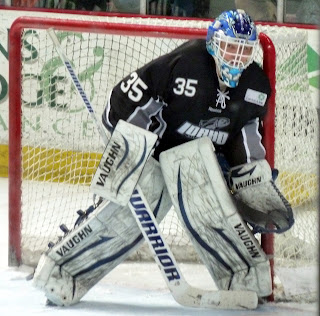 And I also learned that our daughter and her boyfriend are thoughtful cooks. Knowing we've been juicing, they made sure the dinner they made for us - shish kabobs - were mostly vegetables. Even dessert was on the healthier side - strawberries and angel food cake. Thanks you two, we had fun!﻿