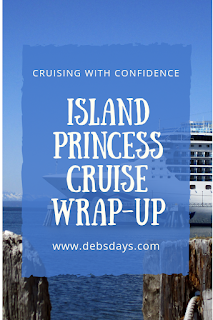 It was a bit of a sad day today. Not necessarily because the cruise itself is over but because we have a couple dear crew members we wish we could have had more time with. And at the most traveled guest brunch we saw one we had lost track of. We are so bummed we didn’t see him earlier in the trip! We did get his contact info so we can keep in touch and will be sure to follow him to his next contract. Yeah, we’re unusual cruisers. We don’t choose a ship for the itinerary; we choose it for who is working on the ship. Since our focus is the crew, we don’t get too upset if things go wonky with food or weather or the cabin or entertainment. We head onto the Golden Princess on Saturday. Why? Because a particular crew member we’ve sailed with is working on the ship. It’s his last week on the ship before vacation so we wanted to be on that voyage before he heads home.

If you’re looking to know what time groups started disembarking, here’s the info sheet from this cruise.

While we are not the typical cruiser, I did make some notes about the trip that may be of interest to others:

*Weather: We’ve made this voyage many times and have found that no matter the month, the weather is a crapshoot. We’ve been sunburned in May, fogged in in June, and frozen in July. That’s one reason we do the two-week trips so often is because it gives us a better chance of finding some good weather somewhere. The weather was spectacularly sunny for the first few days then turned out icky the last few. This sailing was remarkably smooth up until the point we left Glacier Bay.

*Naturalist: We’ve sailed with Mark Harris before. He not only does bridge commentary but also does multiple presentations in the theater throughout the cruise. On some ships we’ve had someone coming on anytime there have been pods of whales around the ship but we didn’t get any of that this trip. We did see more orcas at the first part of the trip than I think we’ve ever seen. The waters were smooth so it certainly made it easier to spot them. Plus I spent a lot of time early on in the cruise on a lounger writing in the covered pool area so my eyes were always glancing up.

*Food: Food is subjective so unless something really stinks we don’t complain much. We did do specialty dining one night at the Bayou Café. We booked when we got on the ship but by then there weren’t many early times left. If you have a specific night, time, and venue that is important to you, book ahead. As for dressing for dinner, some people dressed up and some people dressed more casually. We didn’t eat in the main dining room so I don’t know if anyone was turned away for not wearing something fancy on formal night. We mostly ate at the buffet which was always crowded. They’ve done away with the hand sanitizing stations and only have sinks for handwashing. Crew direct passengers to wash but weren’t consistent with everyone. I washed my hands before but also used my own hand sanitizer after going through. There were several people eating in the buffet, munching on rolls, crackers, and even fries. They need to do a better job at telling people to not eat until out of the line. Since there is no International Café on this ship, hubby just bypassed Deck 5 coffee and would give a server at the buffet his coffee card and never had a problem getting his Americano pretty quickly. There is a bar area near the breakfast bakery items/dessert area where they go to get it.

*Cruise director and activities: Callie Smit was our cruise director. We’ve been with him before on both Caribbean and Panama Canal cruises. We don’t participate much in activities but we do sometimes watch. He is the most involved cruise director we’ve ever seen. He doesn’t just leave his staff to go do the activities – he’s out there participating with them. And the number of activities planned was, well, a lot. Not just bingo and trivia on this cruise. As for the shows, we’ve been to all the shows many times over. We feel old and we get tired so we don’t go anymore.

*Cabin: We had an obstructed oceanview cabin, E509. It was nice and close to the elevators and near the library. The bed is placed under the window like you would find with obstructed oceanview on the Coral. The cabin steward wasn’t the best. It was his first cruise back from vacation and it seemed like he struggled to get back into the groove of things and even remember simple things like ice and replacing the toilet paper. Nothing big enough to complain about, just enough to make it noticeable. 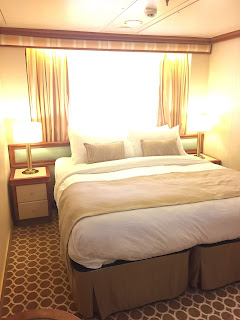 *Passengers: Mostly older folks and a lot of newbie cruisers, which is typical for a May Alaska cruise. There were probably no more than a dozen kids (if that many) total. Once school is out there will be plenty of families on board, but it’s just a bit too early for that. It was a quiet group which was nice. As former teachers with over 60 years of experience between us we rather enjoy the quiet respite from kiddos.

*Dry dock changes: The Island had a dry dock back in November. There is new carpet, mattresses, and new huge TVs in the cabins. The new TVs are like the TVs on the Royal and Regal – except they’ve put these new TVs in the corner where the older ones were. They don’t fit. And they still don’t have the on-demand feature that is on the Royal and Regal. So it is basically the nice TV without all the nice programming. Hubby was bummed when the sports and news channels weren’t available when we were docked in Skagway. 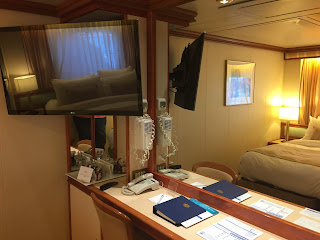 A couple oddities:
*When we switched out our elite minibar for some Diet Coke, it was Diet Coke from Chile (Coca Cola Sin Azucar). Island did the South America 60 day voyage this year and they are still using up their supplies from that trip. It definitely tastes different than the American Diet Coke. According to a knowledgeable source, the minibar swaps and bars on the ship are using up the South America stock and dining rooms have access to the regular US stuff. I’m guessing they have to be getting close to using it up. 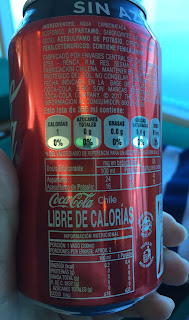 *The first time I used the shower it felt like it wasn’t draining but I wear glasses and couldn’t tell for sure. I stopped the shower and grabbed my glasses and by that time it had overflowed and flooded the bathroom with about an inch of water. I threw the bathroom towels down and a couple pool towels that had been left in the cabin and it still didn’t soak it all up. (I probably should have dried myself off first!) I called passenger services and they sent someone up within a half hour or so. By that time the water had drained out of the shower and I noticed the drain was full of long hair. I have short spiked hair so it was from a previous guest. Yuck. Maintenance plunged it and someone else cleaned up the bathroom and we never had a problem after that.

*And not an oddity but something that surprises me every time – passenger conversations. Everyone is an expert, or so they think. One night we overheard a guy in Crooners talking about the “Johnson Act”. He meant the Jones Act, which means he really meant the PSVA. I really wanted to insert myself in the conversation to correct him – he was giving out so much wrong information – but I just let it go. Who is going to believe that a young-looking 52 year old female knows more about cruising than a gray haired 70 year old man? Not that I know it all, but I do know a lot.

If you’re looking for the log of the cruise, you can find it here.

If you're ready to try out a Princess cruise, contact me. I'm a Princess Commodore, the highest level of Princess Cruises expert there is in the travel agent world. Let me help you put together a cruise suited just for you!