Hubby and I are on the younger side (at least in the cruising world). Other passengers sometimes assume it’s our first cruise. Start bragging to us about them being Elite. 16 cruises they say. And they proceed to tell us all about Princess and the ship and blah, blah, blah. Sometimes their language is condescending and they treat us like we’re stupid and don’t know anything. I’ve now started becoming a bit bolder when they behave that way. I’ve been using the Oh, you’re just baby cruisers line on them. Which leads them to asking how many cruises we’ve been on. When I tell them how many (it’s a high number) it shuts them up. I don’t like having to pull that line but sometimes I can’t stand being treated like an idiot. Anyone who knows me knows I’m about as far from an idiot as you can get. So now we try and avoid conversations with passengers as much as possible and choose a table for two no matter the venue.

Today was the Most Traveled Guest Brunch, the gathering for the 40 passengers with the most days at sea on Princess Cruises. (Side note: most traveled guest had 1024 days.) I don’t know where we fell in the mix but on Alaskan cruises we are nearer to the top of the forty than the bottom. At these parties we get questioned a lot. I can see the wheels turning in the minds of some of the passengers at these gatherings, trying to figure out how we could be in the same room with them. Last year on this same ship I had a gentlemen practically insist I tell him how many days I’ve been with Princess. He couldn’t let it go. So even at these most traveled parties we try and get a table to ourselves.

And today we were lucky enough to snag one. We’ve been to the cocktail party, the luncheon, and the brunch before. We’ve learned to always go on an empty stomach.

They started by bringing around some breakfast items. Parfait, mini blueberry pancakes, some fruit, eggs benedict. (We skipped the eggs, so I added the fruit and seafood salad to the breakfast photos.) 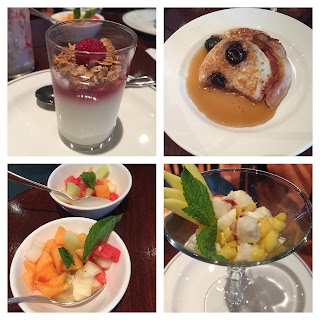 We also had some tasty chicken in a nice sauce, bacon-wrapped scallops, a yummy spicy potato triangle thingy, and a mini lamb chop in another nice sauce. They came around with several other items that we skipped. 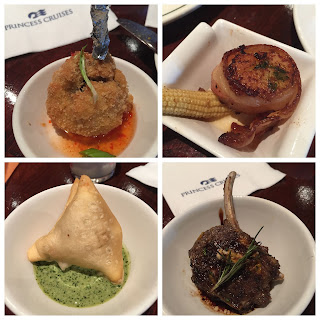 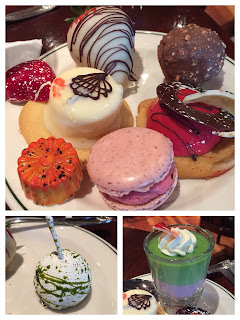 This evening the ship will be doing scenic cruising in College Fjord. The weather doesn’t look the best so the fjord won’t be nearly as beautiful as on the sunny days. I have some interviews to finish up with crew so I may not make it outside during that time. I have plenty of pictures from years past so I’m okay not taking any others. (Update - I made it outside just long enough to snap one photo.) 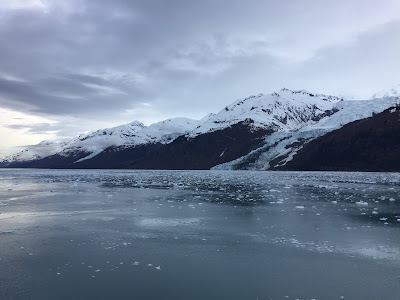 And it was good old packing day. We usually stay two weeks on the ship in Alaska, but we are joining the Golden in a few days to meet up with another of our dear crew members so packing time it is. Since we don’t shop, and we came to the ship with a suitcase stuffed full of goodies for the two crew members on the Island, we now get to leave with a half empty suitcase. Sure like that!

Here is today’s Patter. This week has gone way too fast. If I can get some wi-fi tomorrow I will do a trip wrap-up.