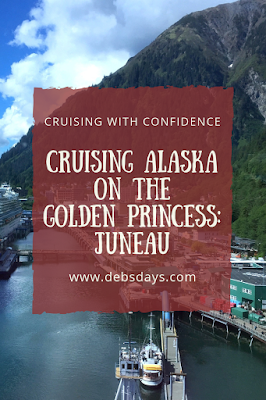 We had no particular plans for this port today, either. Other than trying to meet up with a crew member from yet another ship, the Grand Princess, who was is port with us today. Unfortunately, he too couldn't go out.

There are several reasons crew members can't leave the ship when in port. The most obvious one is that they are on duty during the port hours. Or if they do have a break, there might be a crew drill scheduled during their break time.

There are also a couple other reasons, like the gal from yesterday. The company assigns crew members to a ship for a contract of several months. Those contracts aren't always on the same ship. Our gal just joined the Ruby Princess this month. She's been on several other Princess ships over the course of her career, but since she is on a new ship she is given limited privileges for a while. One of those privileges is the ability to go out in port. Crew members are issued laminated ID badges that allow them to go on and off the ship. (Kind of like a passenger getting scanned on and off with their cruise card.) Without the laminex card they can't leave the ship. And she hasn't been on the ship long enough to get her card. She can't even step outside the ship without it.

Another reason crew members might not be able to leave the ship is because of IPM (In Port Manning) duty. Even when docked in port, the cruise ship is required to have enough crew onboard in case of emergency situations. Crew members rotate IPM days so some days they can't leave the ship.

Which leads us back to today. It was another day of so close, yet so far.

And since we slept away half the morning (late night with a crew member on this ship + inside cabin = sleeping in) we opted to stay on the ship. The weather was actually quite nice and we camped out by the outdoor pool that is still closed.

I watched the clouds rolls in. 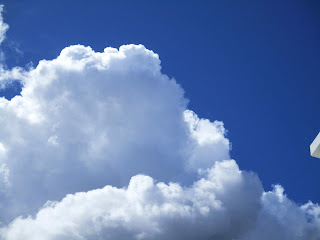 Watched people ride up and down on the Mt. Roberts Tramway. I still can't believe I didn't realize it hung over the mountain when I rode it. 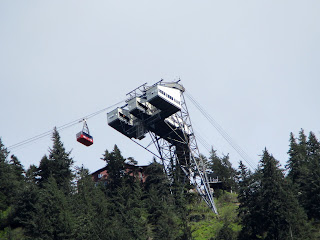 You can also see the view from Mt. Roberts Tramway here and see the tram from below here from my previous blog posts.

And I watched a crazy bird stealing french fries over and over again. He'd sometimes take them above the MUTS screen to eat them but mostly would drop them in the Jacuzzi and then retrieve them and eat them. Yuck, right? He was almost too fast for me to catch him on camera. 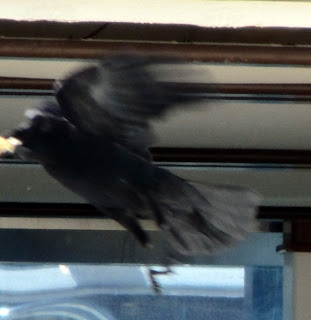 All aboard is a bit earlier today at 3:30. I still see quite a few folks walking this way so I'm guessing a 4:00 pm departure might not happen.

Most of our Juneau adventures happened years ago so we weren't too worried about not going into town. Just last week we walked to Nugget Falls up at Mendenhall Glacier. You can find out about that beautiful walk here.  And here you can see some food and flowers.

It was  nice having a lazy day today. Tonight is formal night and the Captain's Circle Party (which we will again skip). Tomorrow is our last port, Ketchikan. And tomorrow night is the Most Traveled Guest Cocktail Party. Which we will not skip.

Here is the link to today's Patter.

Ready to try out a Princess cruise for yourself? Contact me! I'm a Princess Commodore, the highest level of Princess Cruises expert there is in the travel agent world, and an official Princess Alaska expert. Let me help you put together a cruise suited just for you!