I was up super early this morning working on the new book. I’ve been camping out on a lounger at the covered pool and had a great view of our approach into Juneau. Can’t beat being able to write with a view like this! By the time our arrival was announced at 8:20ish I had already put in a couple good hours of work.

On our previous visits to Juneau we’ve been to Mendenhall Glacier, the Salmon Hatchery, rode up the Mt. Roberts tramway, walked the town, been out drinking and eating with the crew, and watched whales. The one thing we’ve planned, but never got to do, was walking the trail to Nugget Falls at Mendenhall. So today’s goal was one thing and one thing only.

Get to the falls.

Boy, did we have a beautiful day for it. We walked to the tour booths down by the Mt. Roberts tramway and bought tickets for the Glacier Shuttle Express. The $45 per person cost was an ugh moment. But the idea of being able to take our time and not have to worry about car rental or city bus or taxi made it worth it. Sometimes convenience costs more than we’d like. We hopped the 9:30 am white bus with only six other folks. We thought it was an old school bus but it actually was an old prison bus. The hard seats had been removed and padded coach seats were added. It dropped us off at a stop in the visitor’s center parking lot.


Having never walked the trail before, we were a bit worried about how hubby would be able to handle it. It was a nice wide path that ranged from packed gravel to loose gravel to packed dirt and then turned to sand once we hit the last stretch to the falls. The trail was mostly flat but there were a few somewhat gentle inclines along the way.
Even though there was only one bench along the two mile roundtrip path there were several boulders where he could sit and rest. It would have been nice to have more benches for those with mobility issues, but we know it’s a wilderness trail so we can’t expect it to be too easy.

Was it worth it? Absolutely. 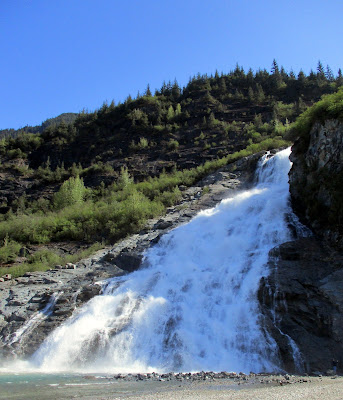 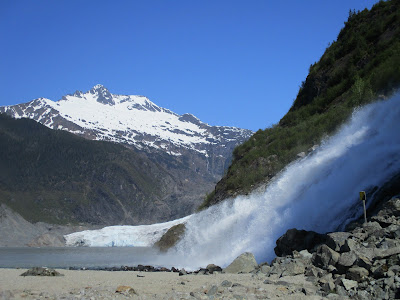 But by the time we got back to the ship we had walked almost five miles. We are both pretty much dead. The Royal Wedding was rebroadcast in Explorers this afternoon and we missed it. (Actually, even if we were full of energy we still would have wanted to miss it.) Libby Riddles is this evening and we will be skipping her presentation. We have a couple meet-ups with crew members later tonight so we’ll make those. Right now it’s five o’clock and our privacy sign is out and it is staying there for a while.

Tomorrow is Skagway. After two days of walking in ports, hubby needs a break so he’ll be staying on the ship. I’m scheduled for a dogsledding run in the afternoon. Not the expensive $500 one but the cheaper one where they run on dirt. It’s supposed to rain tomorrow so it may wind up being cancelled. Let’s hope not.

Here is the link to today's Princess Patters. 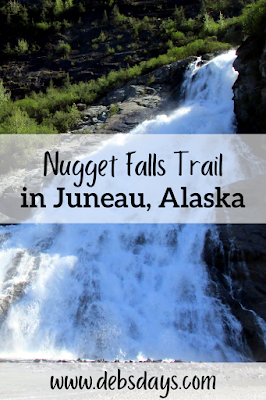