After hours upon hours riding the bus to and from the casino, the time at the casino where I talked to no one, and the day I spent with my daughter today, I know some things for sure.

I know for sure:

But the thing I learned today was the best. Watermelon bowling can be fun on an autumn day. The several days of hard freezes have taken out the entire vegetable garden. My daughter and I spent the afternoon cleaning everything out of there. We picked a load of watermelon, but some were just too small and had to be thrown away. So we did what any logical mother and adult child would do. We took the smallest four and made a bowling game out of them. I don't know who taught my daughter how to bowl with watermelons, but she kicked my behind. It didn't last long though, because I ruined the game when I missed and my watermelon busted open when it went careening into the corner of the planter box.

Today's picture is before the damage. 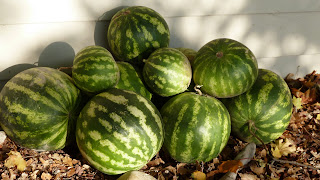