My husband has his funeral all planned out. He knows who he wants officiating, where he wants it held. I would suspect it'll be a full place on that day.

He's a popular teacher, well known in the community, and is someone who never shies away from visiting with students who have long since graduated. He might not see someone for 20 years but still recognizes them right off the bat and is able to strike up a conversation. I made fun of him for years because no matter where we went - including out of state - he would see someone he knows. Now it's no longer funny. It's expected. And he never forgets a face.

Being I've never been a social person, that's a skill I don't possess. Even people I should recognize, I don't. I imagine it comes from being engrossed in work and not people. Getting good grades and being smart has been my claim to fame. But I always compare myself to other people. When I do that, someone is always smarter, nicer, friendlier, more patient, better dressed. The one that bugs me the most is when I say to myself, "She/he is a better person than I am."

I say it a lot. I look at the qualities in other people and I see so much that I lack. It's not so much about being a perfect person, but wanting to be a better version of myself.

Right now the one thing I can turn to as proof of becoming a better version of myself is my sewing for others. I'm not sure why, but kids and soldiers (and kids of soldiers) have been the focus of my sewing. 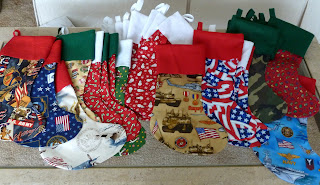