As I worked through my day at home today, it hit me. My life has changed and I don't know if it'll ever go back to the way it was before.

I realized it when I was sitting in the office chair, at the dining room table, while eating. For every meal and every single time I sit at the dining room table I have to use the padded office chair. Ever since I hurt my back two years ago the straight back wooden chairs that go with the set - the ones that everyone else sits in - are too hard on my back. I tried putting in a seat cushion once but it didn't help.

I realized it when I used the bathroom on the elevated seat. It was suggested I use one when I had the knee replacement, and again it seemed to help keep the back a bit calmer. I tend to delay my restroom trips at work (I know, it's a bad practice) because it hurts the back getting up.

I realized it as I was sitting down and shaving my legs. Long gone are the days of standing and reaching.

I realized it as I squeezed the toothpaste with the heel of my hand.

I realized it as I was tying my shoes. At noon. It took me that long to get my fingers to be able to work.

And I realized it as I was having difficulty grasping the pen when I was writing a note to include in my box for Stockings for Soldiers.

While my body has required me to make adjustments that a 46 year old should not have to make, I still can sew on my machine.

80 stockings are now finished and ready to go out the door tomorrow.

I have to think that despite my grumblings about my body, those troops who will be receiving these stockings have bigger issues to deal with than I do. 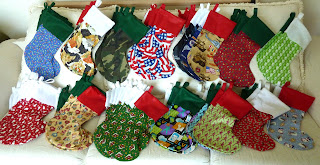