I've heard you are either an Elvis person or a Beatles person. You can like them both, but you always like one more than another.

I'm a Beatles person. When I first discovered music in the 70s I was listening to Paul McCartney and Wings and John Lennon so I became interested in the Beatles. My memories of Elvis were not positive back then. By the time I started paying attention he had let himself go and was not very attractive. It wasn't appealing to watch him perform.

But years later I'd heard so much about Graceland that it went onto my bucket list. When we did our cross country trip a few years back it was one of our must-see places to visit. Stepping into the mansion was like stepping back in time. Same carpet, counter tops, and furniture, all in 1970s color scheme.

Only then did I appreciate Elvis more for what he had done than for what he had become. I started to like Elvis more. Over the past couple years I've even bought some Elvis fabric. Until yesterday I had no idea of how I was going to use it.

As I was cutting up all those stockings for Stockings for Soldiers, it occurred to me I might use some Elvis fabric. I was second guessing whether it would be a good choice. But Casey Kasem helped me decide. Last night I was listening to a repeat of his show from 1977. A year I remember well. How can someone forget when Leif Garrett and Shaun Cassidy had hits in the top 40? This repeat show mentioned several times about Elvis' death. (He had died just a few weeks earlier.) As I heard them talking about him again and again, I remembered the importance he played in music and sewed up those Elvis stockings. 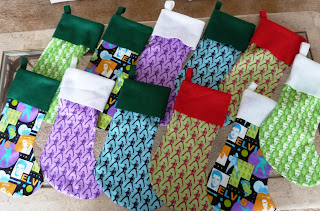