I've never been one to ask for help. I imagine most people are that way. Too afraid, too embarrassed, too proud. Too concerned about trying to be independent.

I've tended to be independent. I left home at 16 and was in college by 17. And being married to someone with a disability who doesn't drive forced me to assume an even greater level of independence. I've been the one driving us everywhere despite ice, fog, and blizzards, and the only one who pumps gas. I've been the one who uses the drill and the saw every time they are needed. I've been the sole lawnmower fixer and weed eater repairer. I've been the house painter, the bill payer, the checkbook balancer, and the tax preparer. The tech support person.   Every "assembly required" thing in this house was put together by me, along with anything requiring tying whether it be a rope, a shoestring, or a dress tie. And 99.99% of the pictures taken over the last 28 years were taken by me.

Over the years, I've gotten my husband to do more things here and there without help. He now uses a can opener by himself. He's gotten a nice collection of clip on and zip up dress ties. Just last week he learned how to text, and this week I showed him how to pay bills.

Recovering from three surgeries in less than a year required me to finally start asking for help. Both my daughter and husband had to pitch in more than they'd ever had before. It was a welcome (and necessary) change for me. But since then, I've again been holding back on asking for help.

25 more Christmas stockings for Stockings for Soldiers. Independently. All by myself. I probably should have asked for help in getting to 80. I might just do that pretty soon. 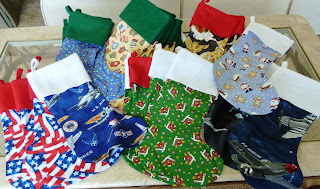