Today I'm sharing the summary of my two weeks aboard the Royal Princess in Alaska. If you'd rather read my daily "live from" I wrote during the trip you can find the 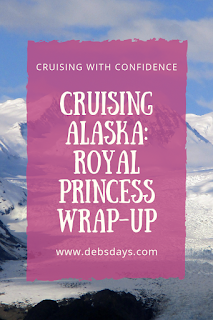 I think our two weeks on the Royal Princess's maiden voyage to Alaska can be summed up in a few words:

Prefer to watch the video version of this post? Find it right here:

Scenery:
This cruise was actually two back-to-back cruises from Vancouver to Whittier and back to Vancouver.

While we visited all ports as expected, our trip to and from Alaska deviated from the typical route. When we left Vancouver we took the green route instead of the much more scenic red route. It was quite disappointing. The difference between those two routes is huge. 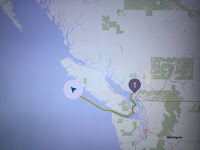 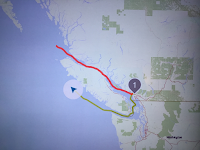 We also had a switch in our Ketchikan approach. Usually when coming into Ketchikan from the south ships take the red route but we came in on the brown route. Another less scenic route.

I had the opportunity to ask the Captain and 3rd Officer several questions about both route deviations. When coming and going in and out of Vancouver there is an issue with the length of the Royal Princess and the British Columbia marine pilot rules. Currently there is a limit on the length a ship can be when passing through the area. While right now the Royal cannot sail those narrower, more scenic waterways outside Vancouver they are working to get clearance at some point during the summer. Sailings later in the season may get the scenic route. An upcoming sailing is planning to head the more scenic way and they've moved up the departure time to account for the tides.

In terms of Ketchikan, Alaska marine pilots had concerns about the maneuverability of the Royal Princess, particularly at lower speeds. So as the ship was needing to slow down to dock in Ketchikan it required a different approach - one that would bring her in from the north. Which now makes sense to why when we left Ketchikan on our way back to Vancouver we we were able to leave from the south. I was told since we weren't trying to slow down the issue wasn't an issue and we could maneuver on out through the scenic south.

But the other scenery along the way made up for it, for sure. 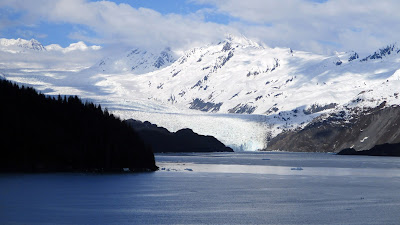 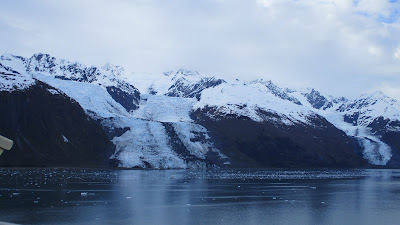 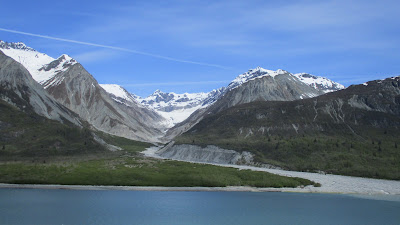 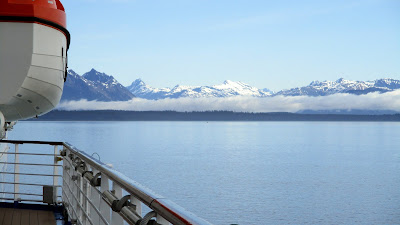 Long lines:
Lines were long everywhere on this trip. Big ship = lots of passengers = long lines. In Vancouver you are funneled into the same security line and US Customs and Border Protection as the other ships in port. Always long lines here. 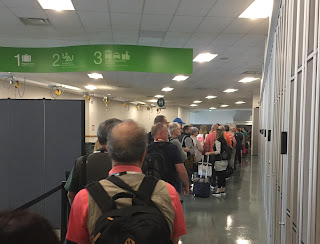 Lines coming back on the ship in port, too. This was only the first third of the line. It switched back two more times. 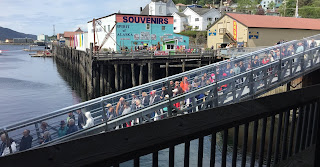 Lines trying to get a taxi in Vancouver. 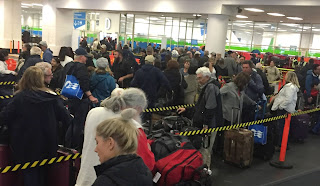 But when the ship was sailing we found plenty of empty spots to sit. There are somewhat hidden doors taking you outside of deck 7. Seats were usually available on both sides.

Our other go-to spot was Horizon Terrace, back behind the buffet. Sometimes it was completely empty. Shh..don't tell. 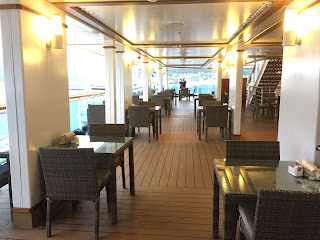 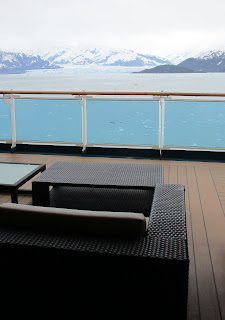 The ship was also very empty on port days. 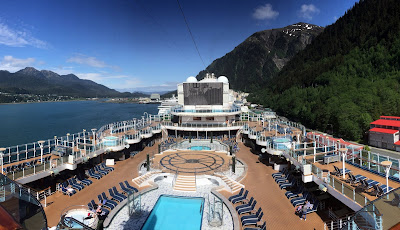 Tasty food:
We usually ate at the buffet. I've said this before, but the buffet is just plain amazing. Multiple lines, multiple choices, good food and plenty of space to move about. 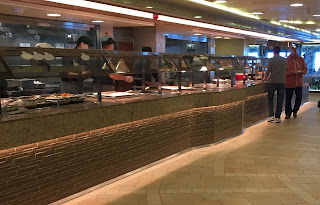 Hubby was partial to the daily grilled veggies and I liked my daily taco fix. 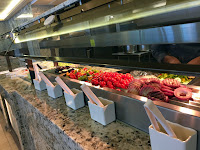 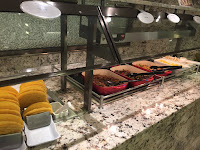 The buffet is where he also got his free fresh ground coffee every day. Hot chocolate is there, too. 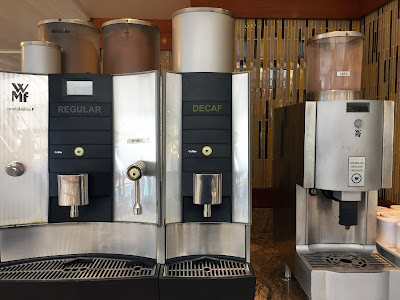 We had Alfredo's a couple times. Tasty as usual! Remember, you don't have to just choose what is on the menu. As long as they have the ingredients they can make you the pizza you want.
We ate at Sabatini's on the Whittier turnaround day. We had a 5:30 dinner and pretty much had the place to ourselves. Food was delicious and we'd absolutely go again. Here's my separate post all about Sabatini's. 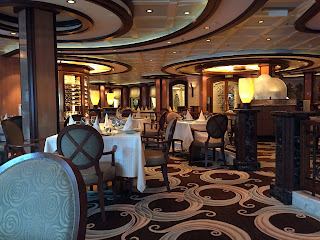 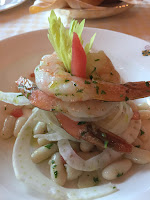 Messing with the Medallion:
We were so very excited we would get to use our Medallions to check in. We had filled out our order and had them mailed to the house ahead of time, took our pictures, uploaded the other pictures required, and scanned our passports into their system. We had the Medallion boarding pass ready on our phone. We also printed off the new Medallion boarding passes just in case, and also printed the old-type boarding passing as a double just in case. It was a good thing we did the extra printing because they only would take the old-type boarding pass. Bummer.

We've used the Medallion before on our month-long stay on the Caribbean Princess when they were still working on rolling out all the components. Here on the Royal they are a bit further along so we got to use some of the apps I had downloaded before leaving home.

We ordered food and drinks through the OceanNow app. Room service? Yep. Fries at the pool? Yep. 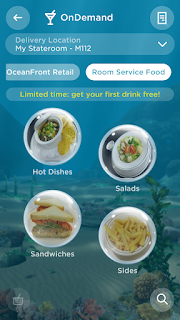 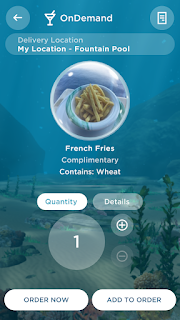 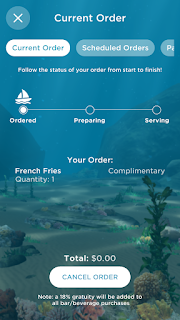 I used OceanCompass a lot to try and find where hubby was at. He's a hard man to track down but no more. 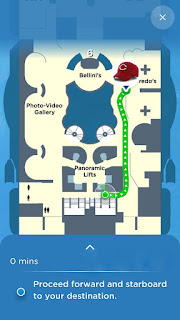 As we found after using the apps, they still need some work as there are some bugs here and there. I'll detail some of the specifics in another post. I'm also working on new Medallion videos and will post them later, too.

MedallionNet wasn't the greatest on this trip. Alaska and those dang mountains, I guess. We had traded in hubby's Elite minutes to get a discount on an unlimited package. I just kept my Elite minutes but wound up just using hubby's unlimited. (Only one device at a time but it was super easy to switch back and forth.) 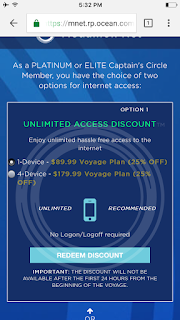 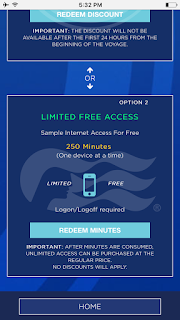 Ketchikan tragedy:
*Our first visit to Ketchikan was tragic as several of our passengers were killed in a floatplane accident. I documented the happenings on board here and here and here. The first few days after the accident the mood on the ship was somber but as we visited more ports folks got back to enjoying their vacation.

Cabin:
We had two different cabins this trip. Our first was an inside cabin at the very front of the ship on Marina deck. We expected it to be the quietest of the cabins but we had some very noisy neighbors in the two suites across and forward of us. Our second cabin was assigned just a couple days before sailing. It was an inside cabin mid-ship on Emerald deck and was super-quiet. The only hang-up was it a was a quad cabin so bunk protrusions got in our way. We had the steward switch us to twins. 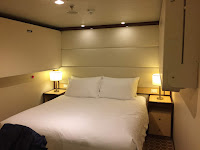 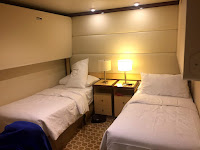 On the Royal, the lights have a slot to place your cruise card so when you're in the cabin lights are on. When out of the cabin, lights are off. But since the Royal doesn't issue cruise cards anymore, they have left a dummy card for passengers to use. We just angled it a bit and left it in the slot and it shut off the lights just fine. 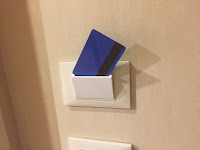 Our second cabin had a new shower curtain. This one had a weight at the bottom to keep that curtain in check. Yay! 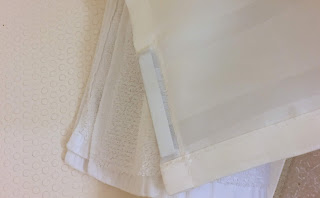 Activities:
While we spent our time onboard watching the world go by, catching up with the on-demand movies, and visiting with crew member friends, the ship had cruise director extraordinaire Matt O' running things. When you have him, you know the ship is teaming with activities. I have all the Princess Patters here if you want to take a look at the day-to-day activities.

Encouraging Words Project:
I left notes and money all around the ship and in the ports. One also went into the Wake Show box each day and Matt O' made sure they were read every single day. Here's a snippet of the Wake Show. A big thank you to Matt for helping spread those positive vibes out into the world.

Would I sail the Royal to Alaska again? Absolutely!


Want to know more about cruising Alaska? You can search using key words and come up with a slew of posts, but you can also check out my Cruising Alaska resources section here where you'll find the most recent posts.