As people are looking for more information about what is happening on the Royal Princess in regards to yesterday's plane crash in Ketchikan, Alaska, I thought I'd update you on what we know so far. 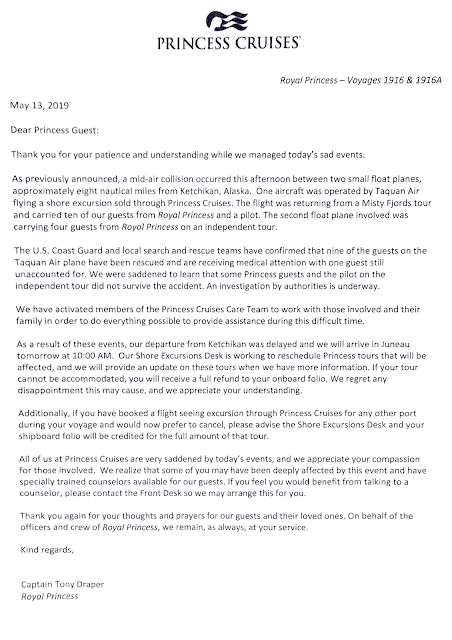 I'll continue to provide updates here on the blog as they become available. I don't do social media - no Facebook, Twitter, etc - but I have heard from others there is quite a bit of misinformation out there. I can't worry about that, but I can report straight from the ship. Let me know if you need anything from me. I'm more than happy to help if I can.

Tuesday afternoon:
We haven't received any new updates from the Captain and I expect we won't as it's now all over the news. I'm purposely avoiding reading or watching anything about it. We have plenty of passengers talking about it and I'm trying to avoid listening to those conversations as well. I don't think predicting or speculating serves any purpose so I won't be wading into those weeds. I've said this before, but I'm a just the facts ma'am kind of ma'am so I'm sticking to the experiences happening onboard.