This morning was another one where my alarm sounded like a foghorn. No wonder when I stepped outside and saw this.
And we weren't the only Princess ship with a foghorn alarm this morning. I heard the Grand Princess from miles away on her approach into Juneau. 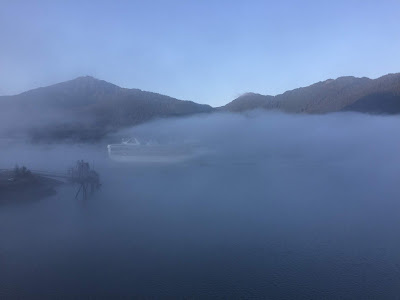 But by the time the Seabourn Sojourn showed up no foghorn was needed. 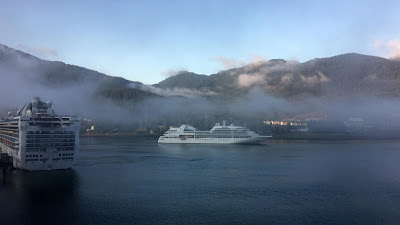 The Grand Princess wound up docking so close to us it kept automatically logging me into their WiFi all day. Guess it kept the information from our cruise on her four months ago. 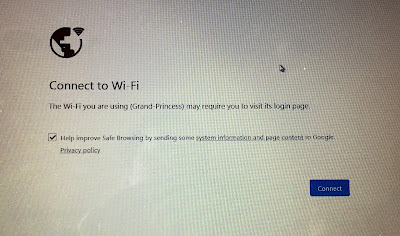 After the fog burned off the sun was shining and it was a beauty of a day. 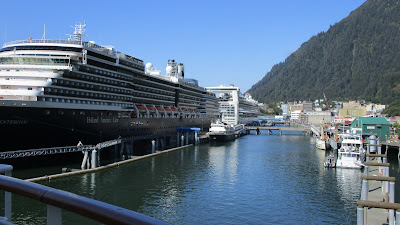 We ate outside on the Horizon Court Terrace and watched seaplanes take off and land. 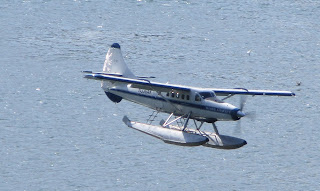 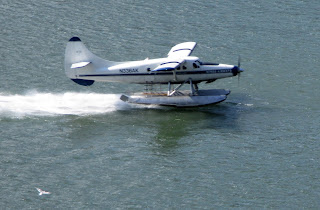 We spent quite a bit of time out on our balcony where we were tucked out of the wind in the warm sunshine. But I couldn't lollygag all day as I had work to do. While my videos didn't get filmed like I planned, I did take loads of pictures to turn into videos. I caught up on emails, did some travel agent work with a client, and started on a couple rough drafts in response to some reporter's questions.

Tonight is formal night again and the Captain's Circle party. We'll be skipping both. Since we are staying in, we'll be ordering room service - from our TV! It's a new feature on the MedallionClass ships and I'll be filming it for you to see.

Today's everything-isn't-always-perfect-in-the-cruising-world PSA is most likely coming from the Ocean Navigator team onboard the ship. I made no fewer than three additional trips to OceanFront last night to try and rectify my Medallion issue. While I no longer have to press body parts up against the wall to get into my cabin, the door is still not automatically opening even with the new clip and a new replacement Medallion. Hubby can be three cabins away and the door unlocks for him. Me? I have to stand right at the door, count to seven, and then it unlocks.

My frustration with it was bordering on disgust as I was ready to throw the d*** thing across the room last night. I think the Navigator team is so over my problem, and it doesn't help that they've spent the Alaska season with new cruisers asking questions like, "What app do I download?", "How do I get my travel companion on my phone", and "How much is the wristband?" Then I not only show up with my ongoing non-working Medallion issues but also have questions they are unable to answer like, "Will you adjust the range on mine?" and "Where can I find the menus that I read were available?" If I wasn't so desperate to make it work (and get those videos filmed) it would almost be comical.

Tomorrow we're off to Ketchikan and we've got a busy day. I have a/an:
*Morning phone call with our daughter
*Obligatory stop at the Arctic Bar with a lunch time delivery from Burger Queen
*Earlier-than-expected departure because of the tides and Vancouver's Lions Gate Bridge
*Afternoon conference call
*Evening Most Traveled Guest Cocktail Party


Want to find out more about what to do in Juneau and other Alaskan ports?
Check out my Cruising Alaska resources: 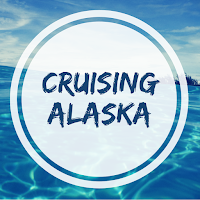