We've had a great day today. I told hubby that something about this cruise just feels different but I'm not sure what it is. Maybe because we embarked in Whittier instead of Vancouver for a change? Maybe because we are so very comfortable on this ship? Because we have so many crew members working here who are near and dear to our hearts? Knowing these will be our last trips to Alaska? Perhaps because I have a huge filming schedule ahead of me and I feel confident I can share things first-hand others are asking about? Whatever the reason, it just feels good. I don't even have to rub my I choose joy tattoo to get myself in a positive mood.

Even though it was light out early and we have a balcony cabin, we both woke up later than usual. Moseyed on up to the buffet, grabbed some breakfast, and ate outside on the back of the ship at the Horizon Terrace without another soul to be seen. (But inside? Man, it was crowded.)

I had my Encouraging Words Project pocket with my dollar bill in it, waiting to put in the Wake Show box. Along with leaving my encouraging words pockets around the ship, I've been dropping them in the Wake Show boxes for the last few years. Over the course of those years, the cruise director here (Cruise Director Extraordinaire Matt O', that is) has been the only one consistently reading them - and believing in the power of them. I stopped by several times to see if the box had been put out so I could get those positive vibes into the world. Only when I ran into him did I find out they aren't doing the Wake Show Box during the seven day Alaska cruises anymore. So I gave the Encouraging Words Project money pocket to Matt O' personally.

Then later as I was headed to the crafting class, I saw the Princess Live doors open and CDEMO (Cruise Director Extraordinaire Matt O') was filming tomorrow's Wake Show. I popped in a bit to watch. I even made it in time to watch him as he read my Encouraging Words aloud. I almost taped it live right then and there (I decided against it), but when the Wake Show is on the TV I'll tape it and add it to tomorrow's post. I have to say, I LOVE, LOVE, LOVE that they've opened the taping up for people to watch. It was interesting to see and I definitely will attend again.

After the Wake Show taping I barely made it in time to the crafts class. I did get to meet a blog reader and her daughter in there. (Hi Chelsea and Emily!) Then I met up with hubby at Crooners where he was already chatting with crew member friends. I so love the connections we've made with the crew members. I do believe it's the best part of cruising for us.

We headed back to our cabin in time for the narration during our approach to Hubbard Glacier. Did I mention how much I love our cabin? Like I said in yesterday's post, we had booked a last minute BW obstructed balcony cabin and were upgraded to free to a special BB balcony cabin. It's actually a handicapped accessible cabin and it is huge. 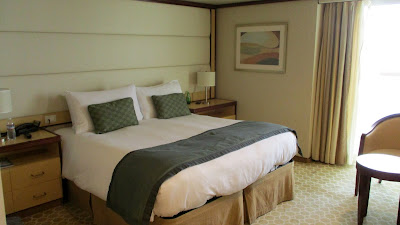 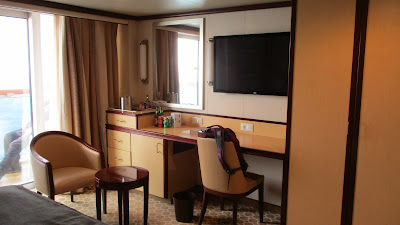 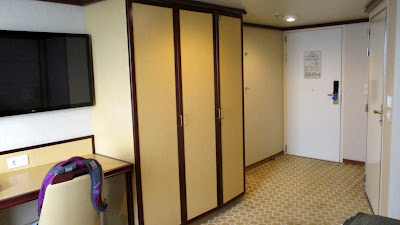 The bathroom is great for hubby and the shower is easy for him to use since it is walk it (actually roll-in) with a bench to sit on. 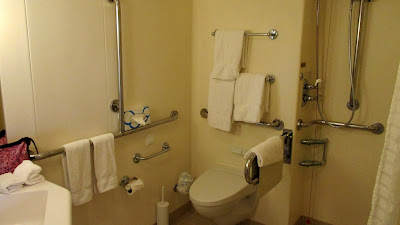 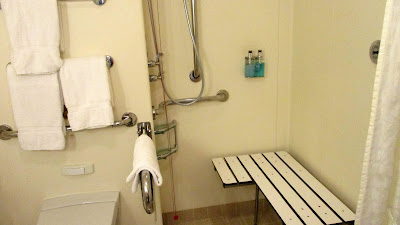 While we could probably always request a handicapped cabin, we never do. But this week they've put us in one. In fact, we are on this ship for three weeks and have to change cabins three times. Two of those cabins are handicapped accessible ones. I guess that's a benefit to booking super late - they stick you wherever they can. We are so good with it! I think I'll do a cabin tour video sometime this week as I know there are folks asking about what handicapped accessible cabins are like.

We watched as the Hubbard Glacier excursion boat loaded passengers to give them a closer look. I can't remember the cost of the excursion, but I know it was more than I was willing to pay. 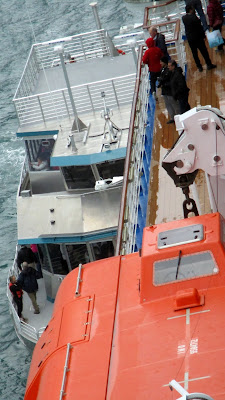 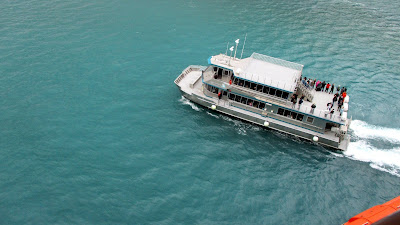 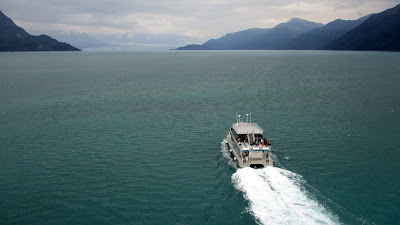 After the excursion left, the Royal Princess moved even closer to the glacier. The Captain turned the ship so both the port and starboard sides got to see the glacier. The naturalist also does some narration during the time. You can hear it from the balconies, open decks, and on the bridge cam station on the TV. 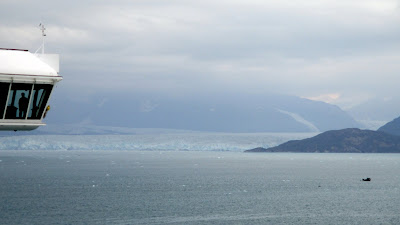 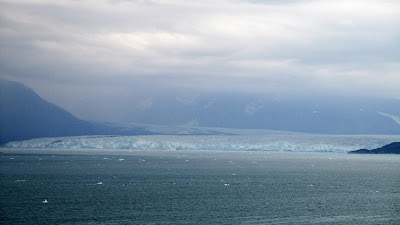 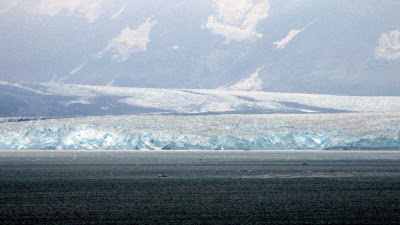 Tonight is formal night and we're skipping it. We'll probably make our way to the buffet where I'm sure we'll find some great choices.

Tomorrow we're off to the best day of any Alaskan cruise - Glacier Bay.