I had a feeling I might be off on the weight loss. See, hubs only weighs himself once a week and I've followed his lead. So the weight loss numbers I reported yesterday were a few days old. I should have waited and reported the new numbers we both earned today. Better numbers.

Hubs has lost four pounds this week for a total of 21 pounds. I lost three pounds this week for a total of 22 pounds. (And to think what we would have lost if we weren't going out to dinner so much.) But we're more than okay with the numbers. Losing weight and still going out to eat is a great thing - that's a lifestyle change we both can live with. (But don't tell too many people that today was Teacher Appreciation at my school and I had a piece of strawberry cheesecake.)

I also have another feeling. Remember the picture of the squirrel I took last year on Day 89? And the story I told about the squirrel ready to attack on Day 101? Well, I think he still has it out for me. Guess he thinks he needs to keep his eye on me when I'm on the computer. Thank goodness for the window between us. 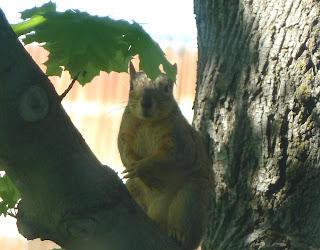