I thought I'd already taken the last one. But I didn't.

When I headed to the grocery store this morning it was 62 degrees. When I arrived back home a couple hours later it was 45 degrees and windy. It's what happened in between that made me take it.

When I got out of the store the wind had kicked up and clouds were swirling. I saw I had a message from my husband about the weather. He advised me to not to drive home yet, but also let me know I missed capturing a great picture of all the pea sized hail covering everything.

When I finally got home I figured the weather would have passed and there would be no record of the strong storm that rolled through the area. I didn't even get out of the car before I realized there was proof of the storm.

My poor tulips. They were so tall and proud just three days ago when I thought I was done taking pictures of them. (And just to think these tulips are under a tree. I'm sure if they were out in the open they would have been totally obliterated.) At least now they look like irises. 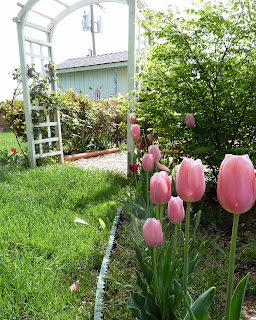 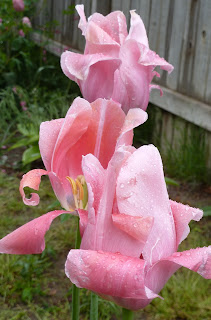