The quail have become like the bison in Yellowstone. Let me explain...

I used to be a consultant at a small school outside Yellowstone National Park. Over the course of a couple years I went into Yellowstone Park five times. The first time I was excited about the bison everywhere and took tons of pictures. The second and third times I only took bison pictures that were interesting (like bison with snow-covered backs). By the fourth time it became, "Oh, it's just a bison." No more pictures. By the fifth time, I didn't even take the time to go into the park. How many bison pictures does a person need?

The quail are the same way. Last year on Day 96 I took a picture of a pair of quail. This year on Day 414 I snapped a shot of a chubby looking quail. But now the quail have become so abundant and frequent I'm not even picking up my camera anymore. It has become, "Oh, it's just quail." (Now if babies come along, you can bet I'll pick up the camera again!)

Tulips are becoming another, "Oh, more pretty tulips". This will be the last picture of the year for tulips. (Please ignore the grass in the tulip bed. I am working on it.) 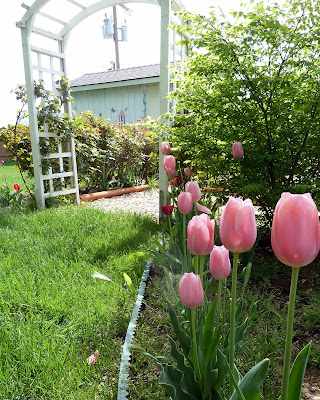