I don't know how it is humanly possible to experience such joy and sadness in the same moment. Knowing the Universe takes care of us helps, though.

Sometimes when we disembark a ship we arrange for wheelchair assistance for hubby. With my shoulder and his latest couple falls, with the ship returning after being out of the US for so long (which means immigration will be backed up with long lines), we decided to meet in the wheelchair disembarkation area this morning. Of course, not unexpectedly, things were running behind. As we were sitting there we saw a familiar face. At the same moment we both shouted, "Sydney!". Hugs and greetings and photos taken. And the same disbelief. Sydney, a crew member we knew from the Grand, was on this ship. For the entire cruise. 14 whole days and we never saw him, never knew he was there. He's the Vines guy now! (And a wheelchair disembarkation guy.) We were oh-so-excited to see him. And oh-so-sad we went the entire cruise without seeing him even once. Breaks my heart a bit.

But then as we waited longer for a wheelchair, hubby and I both shouted, "Shannon!". Another round of hugs and greetings and photos taken. And again the same disbelief. Shannon, a crew member we knew very well from the Royal, was on this ship. For the entire cruise. 14 whole days and we never saw him, never knew he was there. He worked in Crooners the entire cruise. (And was a wheelchair disembarkation guy.) We again were oh-so-excited to see him and oh-so-sad we went the entire cruise without seeing him even once. We had just been talking about him last month when we were in Nassau on the Caribbean Princess. Last time we were in Nassau was with the Royal Princess and we went to the beach with Shannon and a couple other crew members. (Today I even showed him that I still had the picture on my phone - and promised I wouldn't show that particular photo to other passengers!) Missing Shannon this cruise really broke my heart. We finished off with more hugs and a hard-to-say goodbye as he headed out to take a passenger onshore in a wheelchair.

And we continued to wait for our luggage tag color to be called. When it was, and a wheelchair guy showed up at the exact same time, guess who was hubby's wheelchair pusher? It was Shannon! Super excited, we were. Thank you, Universe, for giving us a bit more time with someone we hold so dear.

So happy. So sad. But at least we got to see them both. Then we saw Vickie and Bernie as we were headed out the door. Thank you again, Universe. It wasn't even 10 in the morning yet!

After all that excitement, we got our taxi to the car rental and headed to our first stop of the day, Biscayne National Park. We are working our way through the National Parks and when we arrived at this one we were surprised how far out away from things it was, but also surprised it was free. It was so beautiful. We wandered the paths, watched fish jumping and fisherman fishing, rocked on the porch, got our National Park stamps, and sat a spell on the bench overlooking the water.
That could have been enough for the day. But we had another stop.

When we knew we wouldn't be able to fly home today (Pre-Thanksgiving airfare was ridiculously high) we knew we would not only do some National Park visiting but go to something that just happened to be scheduled the same weekend the ship arrived.

NASCAR Championship Weekend. Tomorrow I'll share more of the story about how we wound up watching NASCAR on TV years back, but today we saw our first-ever race in person today.

It was an afternoon race and we were so tired by the time it started.
We finally decided to call it quits as the sun was going down. The Universe must have had us in mind again. As we were leaving the racetrack, we got a call from the front desk checking to see when we'd be there. You see, they close the front desk at 7 pm. I did not know that until the call.

If we had stayed the entire race we:
A. Wouldn't have heard the phone ring.
B. Wouldn't have made it to Key Largo before 7.
C. Would have lost our room.
D. All of the above.

The correct answer is D. Again, thank you Universe!

While we arrived after dark to a hotel that was extremely difficult to find, our room is a pretty one. We entered through a sliding glass door to see this: 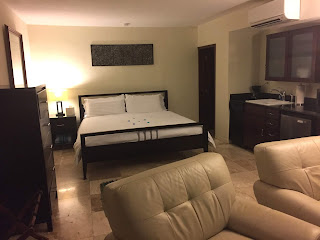 We have a little patio (it's pitch dark out here so I'm not sure exactly what it looks like) and if I look closely I see maybe some sand around the corner. Looking at the pictures in the book that was in our room, we may have quite a nice view out back once the sun comes up tomorrow. Can't wait to check it out.

Oh, yeah, and another NASCAR race. Tomorrow should be exciting.