The first credit card we ever had when we were married was a Phillips 66 gas card. It was only in my husband's name, but I was an "authorized" user. That was back in our college days in Boise. Every time we filled up with gas, we filled up at a Phillips 66. But soon the Phillips 66 stations started disappearing. Even on our short trips out of town it became more difficult to find one. So once my husband got a real job (a teaching job) and we moved out to the country we switched over to Texaco. Then we only filled up the gas tank at Texaco stations.

Then the Texaco stations in Idaho started disappearing, to be replaced by Shell stations. Thankfully our credit card just rolled over to Shell. We've had a Shell card ever since.

But we haven't had a Shell station nearby. In fact, for many years this town never even had a gas station. When our local market burned down quite a few years back (maybe 20?) they rebuilt and added a gas station. But not a Phillips 66, not a Texaco, and not a Shell.

To use our gas card, we've always had to go to another town to fill up our tank. 24+ years of never being able to fill 'er up nearby. Until now.

As I was driving by Snake River Mart, a big vinyl Shell sign is covering the old Sinclair gas sign. For the first time in umpteen years, I'll be able to get gas in the same town where I live.

It's a time to celebrate. (The little things that get me excited!)

Oh yea, and another quilt done for Operation Kid Comfort. 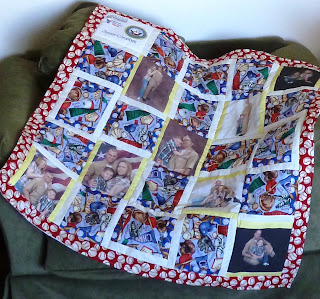