My husband is writing a book. Well, more like composing ideas and stories for a book. He's a high school teacher and has years worth of stories of what really goes on in a high school. By the time he retires in a few years, I'm sure he'll have many more. He's had the book idea in mind for a long time, but only recently has starting putting ideas down on paper.

He could easily write an autobiography of his life. Although he was born with Cerebral Palsy, he isn't confined to a wheelchair. He does walk with a limp and doesn't have use of the right side of his body. If you were to see him, you would think he'd had a stroke. (He gets that assumption from people a lot.) Despite his disability, he was very active in athletics as a kid. Played baseball, basketball, and football, and when he physically couldn't maintain the level of performance needed to play on a high school team, he still remained in athletics. He became basketball manager and was voted "Most Inspirational". He was also "Handicapped Student of the Year" for the State of Idaho.

He went on to college and continued being involved in athletics. He was involved with the athletic training department for Boise State University's football program and was the Equipment Manager for the basketball team. Graduated from college and got a teaching job.

That was almost 25 years ago. Since then he's been teaching at the same high school, has been named Teacher of the Year, has had a fellowship with our state senator back in Washington DC, served with the National Council of Social Studies, and has been on our city's Planning and Zoning Committee and our City Council.

While there are many people who have fought adversity, his life story is unique in that it is his. And maybe someday he'll write it. But right now he's working on his career life story. But he's not a writer. To use education-eze, his oral language proficiency exceeds his written language proficiency.

So it looks like I'll be the editor-in-chief as he pursues his latest adventure. To ease the burden of having a one-handed person typing hundreds of pages of text, (and me having to re-edit all of it) I bought him some micro cassettes. He now has hours of tape to tell his story. 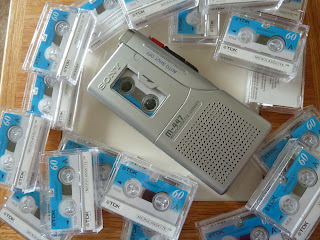