I'm a bit obsessed about our power bill. We run all electricity, no gas (our city doesn't even offer gas), so everything - lights, TV, water heater, stove, dryer - all wind up on our power bill. I'm so obsessive about keeping control over our power output that I've been tracking our average daily kilowatt since 2005.

Our Idaho Power bill's monthly statement includes a chart of average kilowatt per day for every month for the prior year. It compares the current month to the same month the year before. I've been taking it a step further, though. Back in 2005  I started tracking the number each month and inputting it into a spreadsheet. Then when 2006 rolled around, I plugged that number into the spreadsheet and had the formula tally the difference between the two months average daily use. Sometimes it was higher, sometimes it was lower. Every year after that I've continued to plug numbers in. I can see at a glance which months we use more or less, and have formulas in to give us 6 year totals of ups and downs.

The reason I track it so closely is purely financial. We have "level pay", so our bill is the same amount every month no matter what power was really used during the month. But the power company does audits of the level pay and readjusts it if you used too much or paid too much. So I like to see that readjustment number go down. There's nothing worse than a higher readjustment - especially with my income gone.

When a month is higher than the year before, I make sure we watch our use. When I see a month we've been higher a couple years running (like September), we watch our use even more. Since we've been working on lowering each month's daily average for the last six years, now it's becoming quite a challenge to see a month show up lower.

Again, I'm not really a "green" person so I'm not doing the kilowatt tracking for environmental reasons. But I started thinking about what life would be like living "off the grid", without electricity. At one point in my life, I was considering moving in that direction. I remember as a teenager visiting a home in Northern California with some folks who built their own house out of logs that they cut from their land. They grew their own food (even made their own cheese) and raised chickens and goats. They had no indoor plumbing and no electricity.

I wonder what it would be like to create your own power. I've heard of people putting in solar panels, but how could wind power play into creating electricity? When we did our cross country traveling we saw many old farmhouses with windmills. When we were driving back from our little Spring Break getaway today we also saw a couple of wind farms off the freeway. Just how feasible would it be to produce your own wind power nowadays? 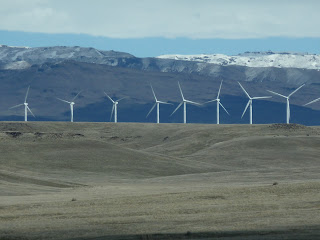 It's surprising how just one picture can get my mind wandering.