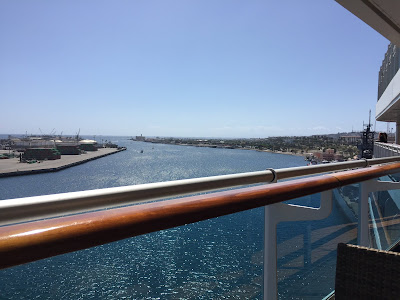 Here we go with another somewhat quickie cruise, a 5 day with an overnight in Cabo San Lucas. It'll be interesting to see how this quickie compares to the 3 day we just left on the Golden. One thing I already have noticed is the passenger makeup seems to be a bit more on the wilder side on this cruise. Okay, maybe a lot wilder. 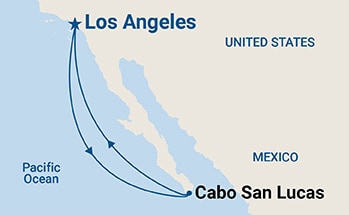 Embarkation was not fun. Again, we already had our Medallions and were directed to a very long line to check in. Can we use the Priority line? Nope. It has to be the long Medallion line. Not all of the Medallion check in stations were open so that may have had something to do with the backup.

Next time I'm not going to bring my Medallion and go to the Priority Line instead. It has to be quicker than what we went through today. And the seating areas, particularly in the priority boarding area (where we couldn't even find a seat) were nuts. We sat outside the priority area watching folks with all colors of Medallions crowding the area. And when they did finally open the boarding doors? Oh. My. Gosh. I don't want to experience that again, either.

After much standing around in and out of lines and a bit of sitting, we did get onboard the ship and headed straight to the buffet.
There was a wedding out back on the Horizon Terrace so we had to confine ourselves to one section of the Terrace. No worries as one of the gals we met last time was stationed there. We heard all about the last cruise to Alaska and the one before when the ship had the oil spill in Vancouver. Sounds like the two weeks we were gone from the ship were pretty eventful. The crew is so ready for warm Mexico.

We again wound up in a mini suite for this cruise as it was another one of the Princess price mistake ones. It's a bummer they don't honor the prices shown on their website, but when they make it up by giving us a mini for an inside price it makes it better. 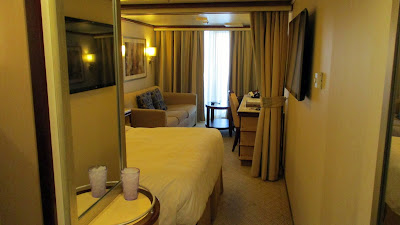 The cabin is kind of similar to last week's on the Golden, but not quite. I'll get more photos up of this cabin later this week. One thing we did notice is something outside our balcony when we look up. 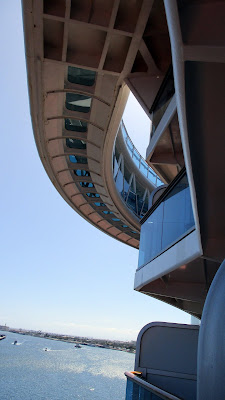 That's the Seawalk, and yep, people can see us. I think if we tuck close to the door we might be hidden. We'll try it out tomorrow.

You can find the Patters from this voyage here.

A sea day is up tomorrow.

If you want to know anything else about this overnight Cabo cruise or have any questions about cruising or Princess Cruises, just ask. And if you want try out a Princess cruise yourself, contact me. I'm a Princess Commodore, the highest level of Princess Cruises expert there is in the travel agent world. Let me help you put together a cruise suited just for you!