I tossed around all kinds of song titles for today’s blog post:


The Captain made an announcement as we were leaving Victoria yesterday, warning us we were in for high winds and rough seas as we made our way to San Francisco.

It was a noisy night. Creaks and groans and shimmies and shakes. The 40+ knot winds and choppy seas made it rough going. Rough enough to grab handrails or walls when possible. Otherwise, a wide stance with arms spread seemed to be the best way to get around. Sometimes the ship was rolling, sometimes pitching, and sometimes both with lots of white caps thrown in. 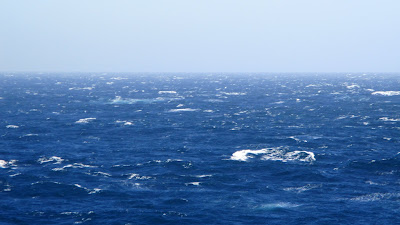 And an FYI for those in a mini suite: The grab bars in the shower aren’t nearly as effective when the ship is rocking and rolling. At least when you’re in a cabin with just a shower you can both hold the grab bar and lean against the wall when needed. In a mini suite with the tub/shower combo? You’ll find when showering the ship is moving you from one end of the tub to the other as you try to hold on. Might as well call it a spread eagle shower stance. But at least one of us in the cabin smells clean!

The waters have calmed this evening and it’s much easier to get around. 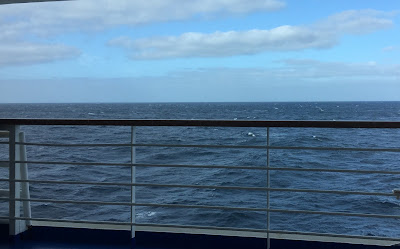 Tonight we used our freebie Most Traveled Guest voucher for dinner at Sabatini’s Trattoria. Big mistake. I don’t know what word best describes how I felt leaving the restaurant. Disappointment? Frustration? Again, we are seeing a pattern on Princess Cruises of crew just not giving a sh**. The food gets served. The server goes away, never to be seen again until the next course comes around. My lamb skewers were so overcooked and rubbery it makes me never want to eat lamb again. I would have asked for something different or to get a lamb skewer do-over order, but the server never returned until he picked it up and took off. Didn’t even get a chance to stop him and ask for anything.

Then my soup was turned from this to this: 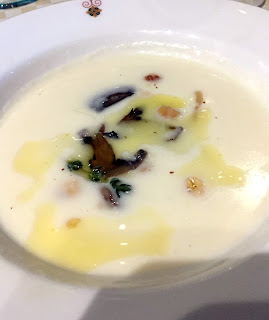 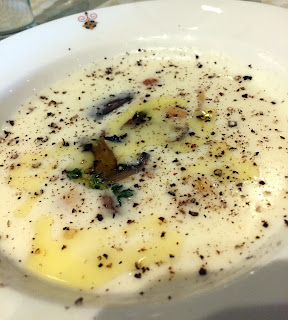 without me asking for it, without me being able to stop it. (I so don't do pepper.) And the pasta course? Same thing. He started covering it in pepper again. I was able to get it stopped before it got too covered, but by then it didn’t really matter. I was done. Before our last course was delivered, the head waiter finally made his way to the table to ask how things were going. And me, who usually keeps her mouth shut about these kinds of things, told him. Did he really care? Not sure. Yet again we heard the whole I’m sorry, let me make it right thing. While I appreciate the effort by him for the last course, it gets so very frustrating/disappointing to see this again and again, no matter which ship we are on. I took plenty of pictures, but it doesn’t matter. There is absolutely no way I would recommend Sabatini’s Trattoria on the Golden Princess. Ever. (Sabatini’s on the Royal Princess when Franco is onboard? Absolutely!)

Tonight’s dinner just put a damper on things. We came back to the cabin, packed, and decided we’re ready to move on. Move on to San Francisco tomorrow where we have a SF Giants Baseball game and where we’ll spend the night before flying out Sunday to Los Angeles. What will we be doing in Los Angeles? Heading back to the Royal Princess, of course! We were on her for her first-of-the-season cruises to Alaska and now we’ll be on the ship for her first-of-the-season cruises to Mexico.

I’m working on a trip wrap-up for this short three day cruise and hope to have it posted in the next day or two.