I know my elf is expecting to see a picture here tonight of the 100 stockings she sewed over my way. But I had more pressing issues at hand. Issues like trying to determine what could cause a sewing machine to get a bit of a hitch in its giddy up.

After some finagling it became pretty apparent what the problem was. When you have this much stuff clogging up a machine - and that's just around the bobbin area - it's no wonder the machine wasn't operating as well on stocking number 400 as it was on stocking number one. Looks pretty tinted with that red felt I've been using. 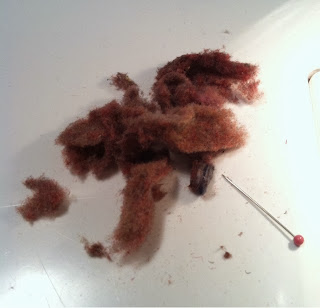